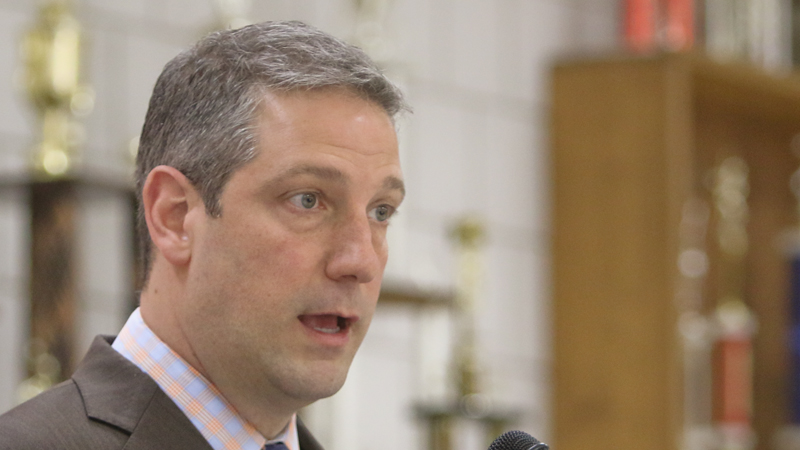 Photo by The Vindicator | U.S. Rep. Tim Ryan of Howland, D-13th, raised nearly $900,000 for his presidential campaign. He said he's not disappointed with his fundraising, and he will likely appear in the next Democratic primary debate July 30-31 in Detroit.

Although he raised far less money than several other 2020 Democratic presidential candidates, U.S. Rep. Tim Ryan says he’s “not disappointed at all” with his campaign’s finances.

Ryan is virtually guaranteed a spot in the next debates, July 30 and 31 in Detroit. But he isn’t close to the 130,000 unique donors, with a minimum of 400 different donors from at least 20 states, needed to qualify for the third debate in Houston on Sept. 12 and 13 – the latter date is if more than 10 are eligible, and a fourth in October.

Ryan’s campaign reported having more than 13,000 individual donors – about 10 percent of what he needs by the Aug. 28 deadline to be on the stage for the September debates.

Ryan of Howland, D-13th, also needs to have at least 2 percent support in four qualifying polls between June 28 and Aug. 28 to qualify for the third and fourth debates. He hasn’t reached that in any of the polls taken since June 28.

When asked if he had concerns about meeting the donor and polling thresholds, Ryan said: “Things can change on a dime. I’ll cross that bridge when we get there.”

Asked about his fundraising totals and if he could reach 130,000 unique donors for the third debate, Ryan said: “We are building support and expanding staff. We had very good fundraising days after the debate and continue to get support on the ground in the early states. We will be on the debate stage, and as we saw, everything can change pretty quickly in this race. It is very fluid.”

Compared to other Democratic presidential candidates, Ryan is lagging in fundraising.

To date, those five are the only candidates to qualify for the September and October debates.

But Ryan is also behind other lesser-known candidates including U.S. Sen. Michael Bennet of Colorado with $3.5 million (though $700,000 was transferred from his Senate account), Washington Gov. Jay Inslee with about $3 million, U.S. Sen. Kirsten Gillibrand of New York with $2.3 million, Montana Gov. Steve Bullock with $2 million, and entrepreneur Andrew Yang at $2.8 million.

Ryan has a long way to go to qualify for the September and October debates, but is almost certain to make the July 30 and 31 debate as it has the same minimum requirements as the June 26 and 27 initial debate of which he participated.

For the July debates, a candidate needs to have at least 1 percent in three qualifying polls or at least 65,000 unique donors with a preference given to those who have both. There are 14 candidates with both.

After that, those with the highest polling average get preference. Because Ryan has 2 percent in the University of New Hampshire’s poll of that state’s Democrats – and 1 percent in other qualifying polls – his 1.33 percent average is enough to get him on the debate stage at the end of the month.

The candidates will be announced Wednesday and CNN, which is airing the debates, will have a live draw at 8 p.m. Thursday to determine the specific candidates for each night.

Ryan also plans to run next year for re-election to the U.S. House, a seat he’s held since 2003.

To date, three Republicans have declared their candidacy: Geno Difabio of Youngstown, best known for being invited by Donald Trump to speak at the president’s July 25, 2017, rally at the Covelli Centre; Duane Hennen of Warren; and Lou Lyras of Campbell, who was removed from the ballot last year as an independent candidate.