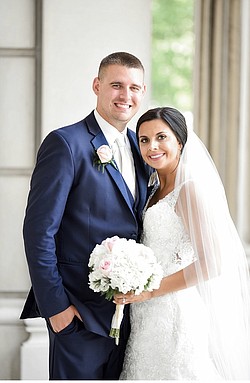 The First Federated Church in North Jackson was the setting for the June 29 wedding of Lacey Jeffries and John Rosati. The Rev. Jack Acri officiated the 1:30 p.m. ceremony. An evening reception took place at The Embassy Banquet Center in Struthers.

Bill and Debbie Jeffries of North Jackson are the bride’s parents.

The groom’s parents are Jim and Kate Rosati of Berlin Center.

The bride wore a lace English net and satin gown of ivory and silver, accented with a deep V, beaded bodice and low scooped lace back trimmed with beads. Lace appliques adorned the tapered, form-fitting gown, and a cathedral-length veil completed her ensemble.

After a honeymoon in Riviera Maya, Mexico, the couple reside in North Ridgeville.

Sophia Joy Derrow, the bride’s goddaughter, and Reagan Baldwin, cousin of the bride, were flower girls.

Ring bearers were Griffin Jeffries, nephew of the bride, and Grayson Miller.

Mrs. Rosati graduated from National College with an associate degree in applied science and is a case specialist at Medtronic in Cleveland.

Mr. Rosati graduated with a bachelor’s degree in education from Kent State University. He is a teacher in the Avon Local School District.