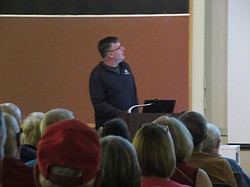 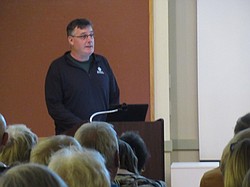 Neighbors | Jessica Harker .The hall of the Metropark Farms in Canfield was packed full with community members interested in learning more about coyotes from Jon Cepek, a Wildlife Ecologist with the Cleveland Metroparks. 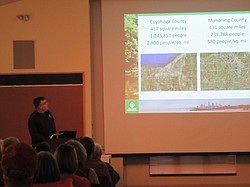 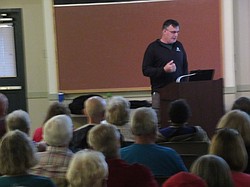 Neighbors | Jessica Harker .Jon Cepek a Cleveland Metroparks Wildlife Ecologist who has worked with coyotes since his time in graduate school discussed the truth behind the animals at the Metro Park Farms June 20.

The Mill Creek MetroParks Farm hosted a lecture on local coyotes on June 20.

The Naturalist Series is a collaboration with the Metro Parks and OSU Extension and the Mahoning County Ohio Certified Volunteer Naturalist program.

“We are so happy to see a crowd like this,” said Education Manager Mandy Smith.

During the lecture, Cepek discussed the facts and fictions of local coyotes.

“It is important for people to be curious and enjoy nature,” Cepek said.

He explained that he has been working with coyotes for more than 20 years, since his graduate school work.

“For my work I field a lot of calls from the community, many of which are highly concerned when they have a coyote near by,” he said.

Cepek said that public perception of coyotes, especially in the media, is often negative.

This can cause the community to panic when coyotes move into their area.

“What we need to understand is that animals just follow their instincts,” Cepek said.

He explained how human impact has greatly changed the natural environment of these animals.

“Their environment changes because of what we do, and then people get afraid of them,” Cepek said. “They are just following their instincts.”

The next lecture in the Naturalist Series will cover Katydids and Crickets on Aug. 10.

To preregister for the event, go to www.millcreekmetroparks.org.