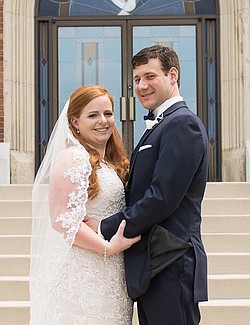 Michael and Donna O’Connor of Austintown are the bride’s parents.

The groom is a son of Raymond and Debra Thomas of Youngstown.

The bride wore an ivory gown made of lace and tulle over regency organza with illusion lace over a sweetheart neckline. The gown was designed with a plunging V-back and a scalloped-lace hem that flowed to a formal train. A cathedral-length veil trimmed with floral lace completed her ensemble.

Ruby and Mabel Thomas, the groom’s nieces, were flower girls.

Mr. Thomas graduated from YSU with a bachelor’s degree in business administration and is an audio technician in Cleveland.

After honeymooning in Hawaii, the couple reside in Cleveland.