It will remain unseasonably cold today, but warm up Sunday 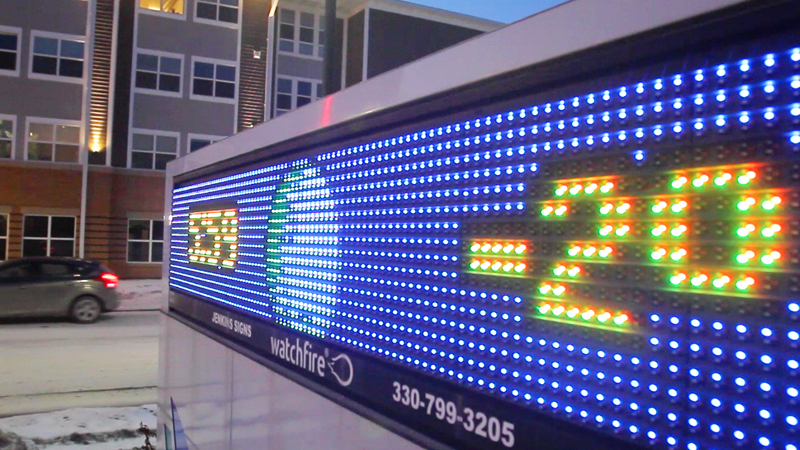 Some of the coldest temps in years hit the Mahoning Valley.

The unusually cold weather is sticking around today, but there is a reason to be optimistic: It’s expected to be close to 50 degrees Sunday.

With the temperature below zero for most of Wednesday, the Mahoning Valley will be slightly warmer today.

Not pleasant, but slightly warmer.

The high will be about 7 degrees, but wind chills will be about minus 25, said Martin Thompson, a hydrometeorological technician with the National Weather Service.

The temperature will drop to a low of about zero tonight with wind chills at minus 8, he said.

Also, the morning commute will be in temperatures around zero.

The wind chill warning for the area ends at 4 p.m.

It could be a lot worse. The actual temperature was minus 75 degrees Tuesday in Grand Forks, N.D. It was minus 48 Wednesday in Norris Camp, Minn.

The high Friday will be in the low 20s with a chance of snow showers before 2 p.m. It will drop to 10 degrees Friday night.

The high Saturday will be in the upper 30s and a low at night around 30, Thompson said.

The average high for the area for this time of the year is 33 degrees, and the average low is 19.

On Sunday, the high will be in the upper 40s, and in the lower 50s Monday, Thompson said.

Although it is closed to the general public, Help Network of Northeast Ohio’s Fifth Avenue community center is open for those in need.

Individuals can call 211 for transportation to the center, other area warming centers or overnight accommodations during its open hours – 8 a.m. to 4 p.m.

“We are keeping it open for individuals with nowhere else to go,” said Lee DeVita, Help Network of Northeast Ohio housing director.

In addition, Help Network can help connect those in need with somewhere else to stay.

Both DeVita and Kosta said they appreciate seeing everyone rally.

“It’s nice to see the community coming together to serve the population with the most need,” Kosta said.

The Rescue Mission of the Mahoning Valley is open and has expanded its number of accommodations, according to a release from the board. Additionally, the board is funding direct transportation to the mission for those without other transportation options. Residents can call 211 to arrange a ride.

Also, the Western Reserve Transit Authority is offering free rides on all its fixed routes during the deep freeze.

Our Community Kitchen along Mahoning Avenue, which offers meals to those in need, and the transitional home Dorothy Day House along Belmont Avenue are also open.

“As part of our role as the safety net for the community, we feel it is important that emergency transportation is provided for our most at-risk citizens at this dangerous time,” said Duane Piccirilli, Mahoning County Mental Health and Recovery Board executive director.

Devonte Jackson is used to walking during the winter, but his 45-minute walk in Warren to his mother’s house Wednesday afternoon required a different level of preparation than normal.

“I got three jackets on and three pairs of pants,” Jackson said as he traveled west through downtown.

“It’s a lot more cold with the wind. It’s terrible,” he said.

Jackson, 21, also was wearing gloves, and his coat had a hood with fur around it.

“That’s the only thing that’s allowing me to make it,” he said of his gloves and many layers.

Jackson said he walks because he has no car.

At the Salvation Army on Franklin Street, the staff designated its facility as a warming center from 9 a.m. to 3 p.m. today “or as needed,” said Capt. Chris Williams.

No one had dropped by for warming and free coffee as of 2 p.m. Wednesday, but the facility served 49 free, hot meals at lunch time, and 20 people had second helpings, Williams said.

The free lunches will continue today because the facility serves as a “soup kitchen” the last five business days of every month.

A number of people also stopped Tuesday and Wednesday to pick out free coats, hats and other cold-weather items following a recent donation. “The timing was good” for the donation, Williams said of the extraordinary cold that blew in Wednesday.

Melissa Telles of Champion heard about the free coats on Facebook. “I grabbed my son’s coat because school is closed and he’s staying home” Wednesday, she said. Her coat and hat were stolen from her car recently.

Telles, who drives for Trumbull County Amish people, didn’t find a replacement coat for herself at the Salvation Army, but she found one she thinks her son will like.

Dennis Gould and his wife, Candy Gould, of Niles brought their daughter and her friend, both 13, to the coat giveaway. Dennis and the girls found coats.

During the low temperatures, the Federal Emergency Management Agency offers the following tips:

Stay indoors as much as possible and limit your exposure to the cold.

Dress in layers and keep dry.

Check on family, friends and neighbors who are at risk and may need assistance.

Know the symptoms of cold-related health issues such as frostbite and hypothermia and seek medical attention if health conditions are severe.

Plug only one heat-producing appliance (such as a space heater) into an electrical outlet at a time and turn space heaters off when leaving the room or going to bed. Never use an oven to heat your home.

Bring your pets indoors or ensure they have a warm shelter area with unfrozen water.

Make sure your vehicle has an emergency kit that includes an ice scraper, blanket and flashlight – and keep the fuel tank above half full.