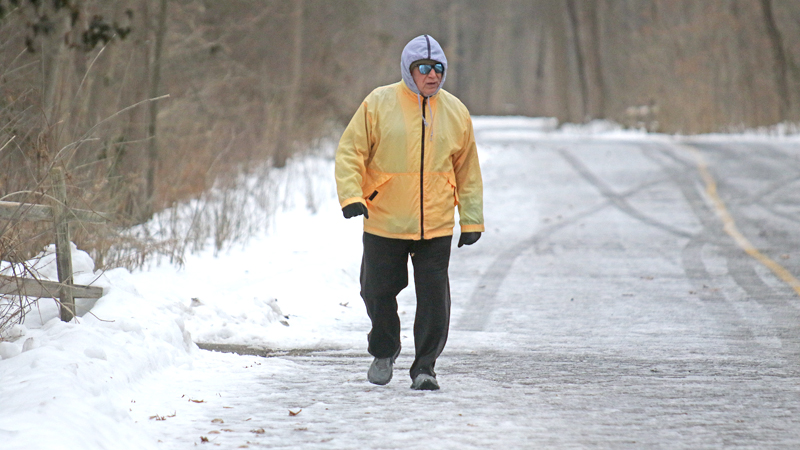 It’s ridiculously cold – and it won’t get better Thursday.

Today’s high for the Mahoning Valley will be below zero – about minus 1 to minus 3 – with a low around minus-10 degrees, said Sarah Jamison, a meteorologist with the National Weather Service.

Wind chills are expected to be minus 25 to minus 30 for most of the day, she said.

There’s a wind-chill watch for the area from 4 a.m.

“The morning commute [today] is going to be pretty rough,” Jamison said. “The temperatures and wind chills won’t improve during the day.”

One resident called The Vindicator to report that scheduled service from a gas company to restore service – and heat – to her home on Rush Boulevard failed to resolve her issues.

A woman, her 3-year-old daughter and 70-year-old mother faced enduring tonight’s subzero temperatures with only a small wood-burning stove and a space heater.

The family’s Dominion Energy gas service had been shut off since summer, and though Blake recently paid the past-due bill to have it restored Tuesday, workers said they were unable because the meters were obstructed by snow, she said.

While workers first told her they wouldn’t return to try again until Thursday, they returned later Tuesday night – less than a half-hour after The Vindicator reached out to the company.

The Rescue Mission of the Mahoning Valley in Youngstown will be open for those in need of a warm place to stay, said Erin Bishop, Youngstown health commissioner.

If the mission is over capacity or experiences a power outage, the city will open the Eugenia Atkinson Recreation Center as a warming station, she said.

The high Thursday will be about 5 degrees with a low around zero and wind chills as low as minus 25.

The average high for the area for this time of the year is 33 degrees, and the average low is 19.

The high Friday will be about 20 degrees with a low at night in the single digits, Jamison said.

Saturday will be normal for this time of the year, she said, with a high in the 30s and a low in the mid-20s.

“There’s indications we’ll get into a warmer-than-normal period next week,” Jamison said. “Until then, it’s going to be well below normal.”

Those in need of help in the Valley during the cold can call 211 for assistance.

Because of the weather, the Western Reserve Transit Authority isn’t charging people for rides on all fixed routes today and Thursday.

WRTA operates 21 fixed routes within Mahoning County, as well as a Warren Express route with hourly service to downtown Warren.

“This is really a safety issue,” said WRTA Executive Director Dean Harris. “For those who can’t get their cars started or who otherwise need to get somewhere, we don’t want them to even think about having to walk.”

Most schools around the Valley are closed due to the low temperatures.

Parent Megan Mercado of Youngstown said her children are excited for the day off. “I do think it’s important to keep the kids safe, and that includes [during] dangerous temperatures,” she said.

Youngstown State University joined local schools in calling off for today’s cold weather. Before its announcement, YSU students started a petition on change.org, urging the university to close. It was signed by more than 3,000 students.

The Centers for Disease Control warns people to avoid staying outside in the below-zero weather because of the possibility of frostbite. Frostbite most often affects the nose, ears, cheeks, chin, fingers and toes. If you detect symptoms, get into a warm room as soon as possible. Don’t walk on frostbitten feet or toes. Immerse the affected area in warm, not hot, water – or warm the affected area using body heat, such as the heat of an armpit, to warm frostbitten fingers.

Make sure everyone in your family knows where the water shutoff valve is and how it works.

Don’t turn the thermostat down at bedtime. Instead, maintain the same setting as drops in temperature overnight can freeze pipes.

Consider having a drip of warm water overnight, preferably from a faucet on an outside wall, to keep pipes from freezing.

Seal leaks around pipes that allow cold air inside.