Temperature is going to drop below zero 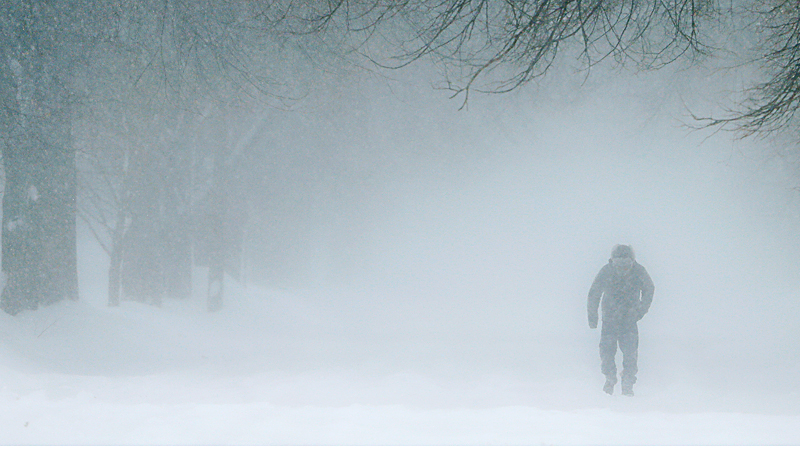 Be prepared for temperatures in the Mahoning Valley to plummet Tuesday night below zero and be very low through Thursday with wind chills at times dropping to minus 30.

“The most dangerous part of the week is the early morning hours of Wednesday through midday Thursday,” said Karen Oudeman, a meteorologist with the National Weather Service.

About an inch of new snow was expected by Tuesday, morning with perhaps another inch falling during the day.

Tuesday will start with temperatures in the mid 20s and steadily drop into the lower teens and a low of minus 5 with a wind chill of minus 12 at night.

It only gets worse Wednesday, Oudeman said.

At 7 a.m. Wednesday, the temperature will be about 5 degrees below zero with wind chills of about minus 20, she said.

“We won’t get above zero” Wednesday, Oudeman said.

The high Wednesday is expected to be minus 1, she said.

The temperature will continue to drop Wednesday, getting down at night to minus 12 with wind chills of about 30 below zero, Oudeman said.

The average high for the area for this time of the year is 33 degrees and the average low is 19.

The National Weather Service issued a wind chill watch for the Valley from 4 a.m. Wednesday to 1 p.m. Thursday.

The high Thursday is expected to be 3 degrees with a low of minus 5 at night and wind chills dropping down to minus 20.

The high Friday will still be below normal, but should reach 19 degrees with a low around 8 degrees at night.

The area could see a high of 32 degrees Saturday, Oudeman said.

She made the following suggestions related to the low temperatures:

• Run a trickle of water to make sure pipes don’t freeze.

• Dress for the weather.

“With those wind chill values, if you get minus 30 you can get frost bite in 15 minutes if skin is exposed,” she said.

AAA offers these tips for vehicles ahead of the cold:

• Have your battery tested.

• Inspect your tire for adequate thread.

• Keep items needed for poor weather in your vehicle including sand or kitty litter, a small shovel, flashlight, an ice scraper or snow brush, booster cables, a blanket, gloves or mitten, and flares or reflective triangles.

Aaron Gilger, men’s director for the Warren Family Mission, said the organization expects to see an increase in homeless people coming to the center’s facilities in the next few days.

“We definitely will be setting up more cots,” he said. “It helps get people off the street and gives them a place to sleep.” The mission also feeds them. He added that individuals staying there sign out of the facility by 9 a.m. and return at 5 p.m. The mission has a men’s center at 1228 W. Market St. and a facility for women and children at the corner of Elm Road and Porter Street Northeast, as well as the main location at 155 Tod Ave. NW.

The main facility on Tod closes at 5 p.m. each day, so that would not be a good place to go after 5 p.m., he said.

The Niles Wellness Center is adjusting its hours for Wednesday and Thursday. The center, on Sharkey Drive, will be open at 9 a.m. and close at 9 p.m., its management announced. The facility is normally open a couple hours earlier and later than that.

Those planning to shelter at township facilities should give advance notice to the police or fire departments as the facilities won’t be manned unless there’s a need, officials said.

The fire department’s station No. 4 along South Turner Road will also be manned from Wednesday night through Thursday night, Administrator Michael Dockry said.

As sub-zero temperatures can damage fire engines and equipment, the trucks won’t be used for nonfire calls from Tuesday night to Friday night – rather, the department’s SUVs will be used, Dockry said.

East Liverpool, in conjunction with the East Liverpool City School District and the Community Resource Center, announced that facilities will open as warming centers to provide temporary shelter in the event of a power outage between Tuesday and Thursday.