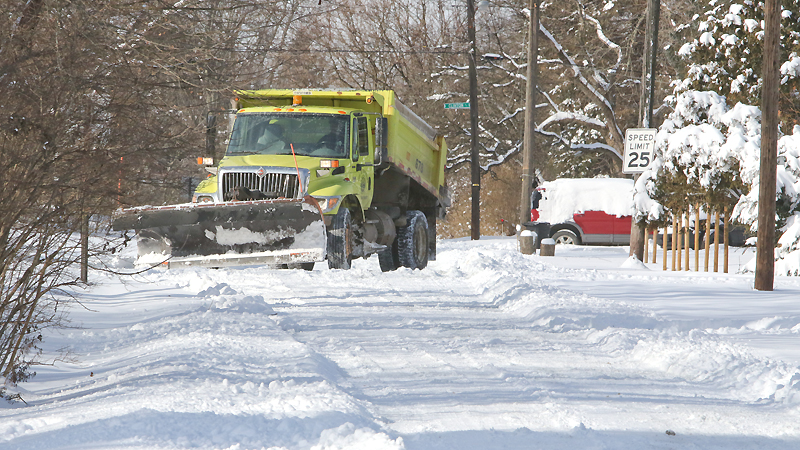 Heavy snow, breakdowns of its aging snow-removal fleet and people ignoring the city’s parking ban played roles in Youngstown’s challenge to plow streets even though employees worked round the clock, the city’s buildings and grounds commissioner said.

The street department, with workers on 12-hour shifts, wasn’t able to finish plowing the entire city until about 4 to 5 a.m. Tuesday, said Kevin Flinn, the commissioner. The workers continued to work on a second run right away, first focusing on main streets including pushing snow out of intersections and to spot salt, he said.

“It’s been an experience,” said Flinn about the major storm that dumped about a foot of snow on the Mahoning Valley. “It speaks volumes about what the guys in the street department do. They persevere. They’re working with old equipment and doing the best they can. The sheer volume of the snow was a challenge.”

About a foot of snow fell in the Mahoning Valley on Saturday and Sunday.

Within the first hour of plowing, three of the city’s trucks had to be taken off the road, Flinn said. One truck had a problem with its hydraulic line, one had a broken hitch and the heater on the third didn’t work, he said.

Those were repaired, but another five broke down Monday, Flinn said.

“It’s an ongoing problem with our fleet,” he said.

The city ordered two new plows, but they won’t be ready until later in the winter or early spring, Flinn said.

Another issue, he said, was several people ignored the city’s parking ban, slowing down the plows.

“There were cars all over the place,” Flinn said.

In response to a Facebook post Tuesday from The Vindicator, some people sounded off on snow removal.

One person wrote: “Meridian Road in Youngstown is a major thoroughfare and it looked like it had been barely plowed.”

Two posters wrote that roads maintained by Mahoning County were in bad shape while two others criticized Warren’s roads. Several pointed to problems in Youngstown.

Area emergency officials asked the public to assist with clearing snow from fire hydrants. Before the storm, the Campbell Fire Department shared an image on Facebook reminding residents to clear a three foot radius of snow from around fire hydrants in their neighborhoods, with the line “every second counts when there is a fire” appended.

“With the amount of snow we’ve had and when plows drive by and pile the snow, the fire hydrants get buried and we can’t find them,” Pitzer said. “In that situation that would be a problem if we had a fire and couldn’t locate a hydrant.”

Meanwhile, in Campbell, Tenney Avenue and Coitsville Road were both relatively clear of snow by Tuesday afternoon. Twelfth Street had been plowed, but there was still no pavement visible and conditions were still slippery for motorists.

On McCartney Road, snow on the Campbell side of the street had largely been cleared on Tuesday afternoon, while the Youngstown side was still largely covered.

In Liberty, Belmont Avenue was clear of snow and slush Tuesday morning. There seemed to be no issues traveling on the road.

Traveling on Martin Luther King Jr. Boulevard from Girard to Youngstown, however, required slower driving because the road was covered in slush in some parts and was still covered in snow on others.

Jessica Hipple of Warren said her neighborhood on Greenmont Drive experienced issues with snow plowing crews. She said the city road department came through the neighborhood on Saturday, but blocked her driveway as it was pushing snow. Tuesday, she said the post office notified her that it couldn’t deliver her mail because of the snow.