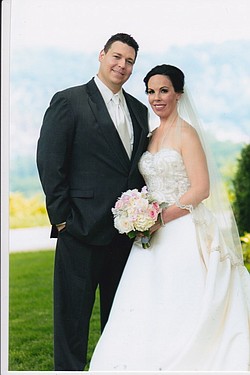 Meredith L. Dotson and Dr. Cole C. Budinsky were united in marriage May 26, 2018, at Suncrest United Methodist Church in Morgantown, W.Va. The ceremony was officiated by the Rev. Matthew Johnson. A reception took place that evening at Morgantown Marriott Waterfront Place Hotel.

D. Lyn and Susan Dotson of Morgantown are the bride’s parents.

The groom is a son of Charles and Celeste Budinsky of Poland.

The bride wore an ivory, strapless, satin gown with a sweetheart neckline and silver beading. The skirt featured a dropped waist with box pleats and a cathedral-length train.

Mrs. Budinsky graduated from West Virginia University with a bachelor’s degree in athletic training. She also earned a master’s degree in higher-education administration and leadership from Auburn University. She is a clinical coordinator for sports-medicine at Nationwide Children’s Hospital in Columbus.

The couple reside in Columbus and are planning their honeymoon for a later date.