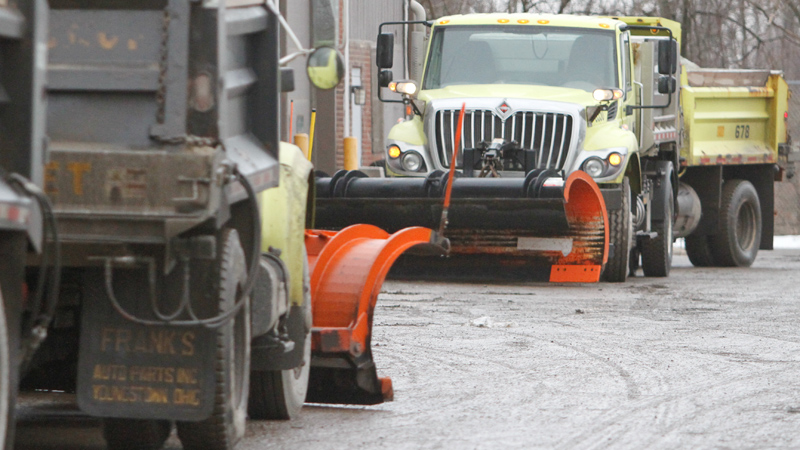 The Mahoning Valley should expect 6 inches to a foot of snow Saturday with snow-removal crews prepared to work round the clock to clear roads.

“There’s a storm coming with the potential to drop significant snowfall Saturday,” said Tom King, a meteorologist with the National Weather Service. “It will be a significant amount to shovel or snowblow.”

And the area won’t get any relief following the major snowstorm, he said.

There’s more snow predicted for Sunday with additional accumulations and a high that should only reach 20 degrees and a low near zero at night.

The high for Monday should be about 15 degrees and a low at night about 2 degrees.

“You’ll be cold when you dig out,” King said. “It’s going to be pretty cold.”

Kevin Flinn, Youngstown’s buildings and grounds commissioner, jokingly said he was hoping for rain, but realizes the city’s street department crews will be very busy plowing this weekend.

The city will use 20 trucks to remove snow, he said.

That includes 18 of its own plows – including two smaller dump trucks that will be used exclusively to clear the downtown areas – and two plows on loan from the Ohio Department of Transportation, Flinn said.

The city ordered two new plows for the first time in more than a decade, but they won’t be ready until later in the winter or early spring, Flinn said.

Mahoning County Engineer Patrick Ginnetti said: “We have all of our crews getting prepared for whatever comes. We’re at the mercy of the weather. We prepare for the worst and hope for the best.”

The county has all 20 of its plows ready to tackle roads, he said.

“We try to get out ahead of the storm,” Ginnetti said. “We track the forecast. If it comes down heavy, we’ll work our workers as long as they can go and then replace them with fresh bodies. We work until the roads are clear.”

In Trumbull County, Brent Kovacs, spokesman for ODOT District 4, said the department will determine how to prepare for Saturday’s storm once the predicted amount of snow is updated on Friday’s weather forecast.

ODOT averages about 20-23 plow trucks per shift in Trumbull County. Between Trumbull County and Mahoning County there should be 40 trucks on the roads at all times, and the road crew will work 12-hour shifts, Kovacs said. The crew will be plowing state routes and U.S. routes not within city limits as well as interstates.

“As long as it’s snowing, we will be on the road plowing,” Kovacs said. “The big thing is, if you don’t have to go out this weekend, don’t go out. If you do, go slow, give yourself plenty of time to reach your destination.”

Tom Klejka, highway superintendent with the Trumbull County Engineer’s office, said its road crews will have 24 plow trucks on the road. He said the crews will be out for the entire length of the storm, and the crew will be working 12-hour shifts.

City Manager Wade Calhoun said salt trucks will be on the road Friday night for “pre-emptive” work and remain on-call throughout the weekend.

“We have plenty of salt and aggregate on hand so we will be plowing and treating all 144 miles of township roads,” said road superintendent Marilyn Kenner.

Poland village has three plow trucks readied for the storm. “Our village street department guys are ready to work as soon as the storm hits,” said Councilman Anthony Lattanzio.