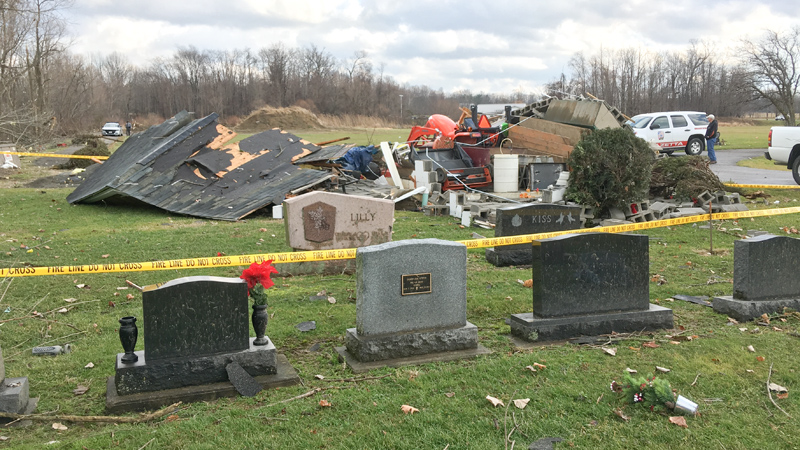 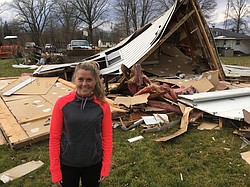 Along the way, the storm that reached 100 mph winds picked up and moved a garage on North Park Avenue, downed trees and power lines on Everett Hull Road near the Trumbull County fairgrounds, destroyed a building at Hillside Cemetery on the other side of the lake and knocked down trees in Cortland.

The funnel cloud was clearly visible as it headed into Cortland, allowing a worker at the cemetery and multiple individuals in Cortland to grab a video before it dissipated.

Though several buildings were damaged, no one was injured. As of 8 p.m. Tuesday, all power was restored in the county.

It caught many people by surprise, possibly even the National Weather Service, which had not issued a tornado warning for Trumbull County until after the county 911 center called the service at 10:29 a.m. to tell it about a sighting, said Ernie Cook, 911 director.

The 911 center got a call at 10:27 a.m. from a Bazetta Road woman saying she witnessed a funnel cloud knocking down power lines and trees.

During the call to the NWS, the 911 center and the NWS agreed the tornado sirens should be sounded, and he believes all 14 sirens controlled by the county 911 center were sounding by about 10:30 a.m., Cook said.

Don Petrosky, owner of Petrosky Bros. Construction, was fixing a chimney at a house on Lakeshore Drive, apparently moments after that first 911 call when he realized the sky was getting dark and thunder was coming.

“When it got closer, the temperature dropped. It started to rain hard and then within 45 seconds to a minute, the storm had passed,” he said.

During that brief period, Petrosky crouched behind the chimney.

“The shingles were whipping past my face and my head,” he said. “I watched it pass. It wasn’t a funnel. It was a huge, black storm very close to the ground as it was passing by.”

Petrosky said it was about 10 feet off the ground and blew through about 50 mph.

Petrosky said the wind blew down his ladder, but a man from across the street came out of his house in his underwear with no socks and brought back his ladder, so he could get down.

Petrosky said the storm came up so fast, he believes it was safer riding out the storm on the roof than trying to get down on his ladder.

The wind knocked shingles off the roof, so he left in his truck, got some shingles and a generator and returned to fix the roof, he said.

Power was out to the neighborhood throughout the day as power workers fixed the downed lines on nearby Everett Hull Road.

Other homes near the one where Petrosky was working were also damaged, including two nearby that had damage to their garage doors – the storm had sucked the doors outward.

A picture of a funnel cloud over Mosquito Lake taken by Aaron Chine circulated on social media, as well as a video taken from a similar location in Cortland taken by Joshua Lee Nelson, a local musician.

Nelson said he stood next to his pickup truck in the parking lot of his apartment at Market and Bank streets about a quarter-mile from the lake as he watched what he described as a “water spout and a funnel cloud connecting in the middle, very surreal.”

He said it was “cool, because me and my buddy were here for the first time seeing something like that happen in front of our face.”

The tornado was coming straight for him, so he finally started running toward his apartment and got inside when the storm got to about 100 yards away. He said it passed quickly.

“In five minutes, it was sunny again,” he said.

Nelson said he noticed there was no tornado siren when the tornado went through.

The weather service said the tornado started at 10:25 a.m. in Champion and was on the ground 4.5 miles as it headed east through Bazetta and into Cortland. Winds reached speeds of 100 mph and had a width of 75 yards, said Mike Griffin, the NWS lead meteorologist.

The area was hit again by another line of thunderstorms late Tuesday afternoon. These storms brought more warnings but no dangerous weather.

Emily Metheny of North Park Avenue, which is the dividing line between Champion and Bazetta, said she awoke to the sound of wind, rain and thunder.

She saw trees being uprooted across North Park on the Champion side, then she looked across at her grandparents house.

“I saw something white in the sky. It was the garage and it hung in the sky and just dropped,” she said.

The garage appeared to have been moved from its normal spot about 40 feet east and was destroyed.

Her grandparents had a pickup truck in the garage. Miraculously, it had only one small scratch on the tailgate.

Sierra Morris of Market Street in Cortland said she heard a “big gust of wind, and the power went out. I just thought it was a thunderstorm.”

But when she and her husband, Michael, looked around outside, they saw a big tree branch had fallen toward the cars in the driveway, damaging their 2017 Chevrolet Malibu.

“We were lucky today,” Michael said, holding the couple’s son, Brantley, 2. “Twenty feet the other way, and it would have come right through our house.”

A short distance farther east, Shari Baxter, whose home is on North High Street next to the Cortland United Methodist Church, had three pine trees lying on the roof and back porch after the storm.

When Baxter went outside to see how much damage was done, she was shocked to find eight huge pine trees in a row and all overturned in the same easterly direction toward her house.

“I said holy...” Baxter said. “Who would have thought in January?”