Friend of the court filing in Youngstown HB 70 legal battle 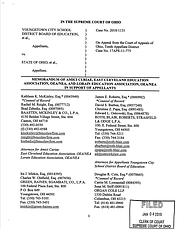 East Cleveland and Lorain education associations filed a “friend of the court” brief Friday on behalf of the Youngstown Board of Education’s legal battle against House Bill 70.

A “friend of the court” brief is a court filing written in support of another party’s contention. It was filed by the labor unions in the Ohio Supreme Court.

HB 70, also referred to as the Youngstown Plan, was signed into law by Gov. John Kasich in July 2015. It enabled a state-appointed academic distress commission to hire CEO Krish Mohip to lead the district. The bill gives Mohip complete operational, managerial and instructional control.

Mohip refers to the elected board of education as an advisory panel.

Mohip will be leaving the district July 31, and a new CEO will be selected by the academic distress commission.

The rule requires bills to be considered by each house on three different days “unless two-thirds of the members elected to the house in which it is pending suspend the requirement,” according to the brief.

The adoption of the amendments to Am. Sub. HB 70 was done in less than 24 hours, the brief said.

“Am. Sub. HB 70 was introduced, amended and adopted all in the same day,” it continues. “There were no hearings, no open debates and no opportunity for legislators to communicate with their constituents over the issue.”

The Youngstown Board of Education first filed an injunction to stop HB 70 from taking effect because it would do irreparable damage, according to court records.

Franklin County Common Pleas Court denied the appeal Oct. 11, 2017, citing reasons including a failure to show there would be irreparable damage, according to the decision.

School board President Brenda Kimble couldn’t be reached Friday but said after her election to a fifth year heading the board Wednesday: “I’ve really been working to bring parties together across the state to fight HB 70 and save all the children in public school systems because it affects not just Youngstown, but all public school districts in the state of Ohio.”

Board member Dario Hunter said: “I’m glad that other districts are recognizing the hazards of HB 70 and joining the effort to fight predatory state takeovers. HB 70 has proven a failed experiment, and we must protect our children from its overspending, underperforming aftermath. Real educational reform comes through the efforts of parents, students, taxpayers and their local representatives – not simply the stroke of a pen in Columbus.”