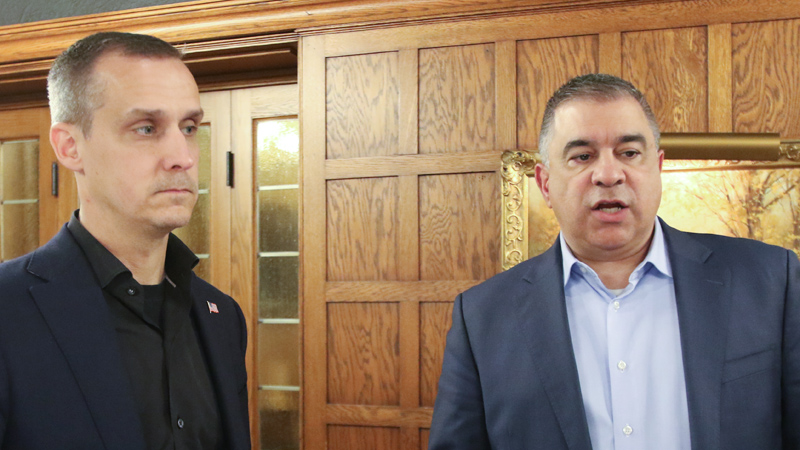 Corey Lewandowski, Donald Trump’s 2016 campaign manager, said he sees U.S. Sen. Sherrod Brown as one of the president’s more formidable Democratic opponents in 2020 should he become a candidate.

In a Tuesday interview with The Vindicator, Lewandowski said: “If [former Vice President] Joe Biden or Sherrod Brown were to get into the race, they would have an opportunity to compete in the blue-collar states that Donald Trump won the last cycle, that [U.S. Sens.] Elizabeth Warren or Kamala Harris cannot compete in, specifically in Ohio, Pennsylvania, Wisconsin, Michigan. The path for the 2020 campaign, once again, as always, runs through Ohio.”

Lewandowski and David Bossie, Trump’s 2016 deputy campaign manager, were the keynote speakers at an Ohio Republican Party fundraiser at the Youngstown Country Club. The event was closed to the media, but the two gave a joint interview to the newspaper after the luncheon.

When asked to comment on Brown further, Lewandowski said, “My question to Sherrod Brown is: What is your signature achievement for all of the years you have served in Congress? One bill. You tell me what it’s done to make the people’s lives of Ohio better, and I don’t think anybody in the 88 counties of Ohio can answer that question.”

When Brown launched his “Dignity of Work” tour Jan. 30 before going to Iowa, he pointed to several accomplishments including making the Earned Income Tax Credit and the Child Tax Credit permanent, extending the Children’s Health Insurance Program and getting the Leveling the Playing Field Act approved to “make it easier for American companies to stand up to countries that cheat our trade laws.”

Lewandowski said it’s too early in the campaign to gauge the field – Brown is visiting early presidential primary and caucus states, and Biden hasn’t announced if he’s running – but he also said that former New York Mayor Michael Bloomberg’s “ability to self-fund the campaign to the tune of $1 billion” would “make him a formidable candidate.”

Bossie said Lewandowski’s statements “hit it on the head. If I knew what was going to happen, I’d be in Vegas. I don’t have a crystal ball. What I do see is the Democratic Party lurching further and further to the left. They continuously focus on policies that don’t help the American people. ... You look at policy after policy. They’re devoid of anything that’s going to make America’s economy stronger or America’s position in the world stronger and the American people safer. I’m up for that fight every day.”

The two were asked about Michael Cohen, Trump’s former attorney, who, Tuesday, started to meet with congressional committees to discuss Trump’s alleged involvement in some of the crimes Cohen pleaded guilty to last year. Tuesday’s meeting was in private, but Cohen – who was convicted of lying to Congress when he testified in 2017 – will be questioned by a House committee in public today.

“Michael Cohen is a proven liar, a convicted felon that pled guilty to and he was accused of and convicted of lying to Congress,” Lewandowski said. “But they brought him back to lie some more. I don’t see how there’s any credibility to his testimony.”

Bossie criticized the Democratic leadership in the House as being “bent on destruction. They don’t have a policy agenda for the American people.”