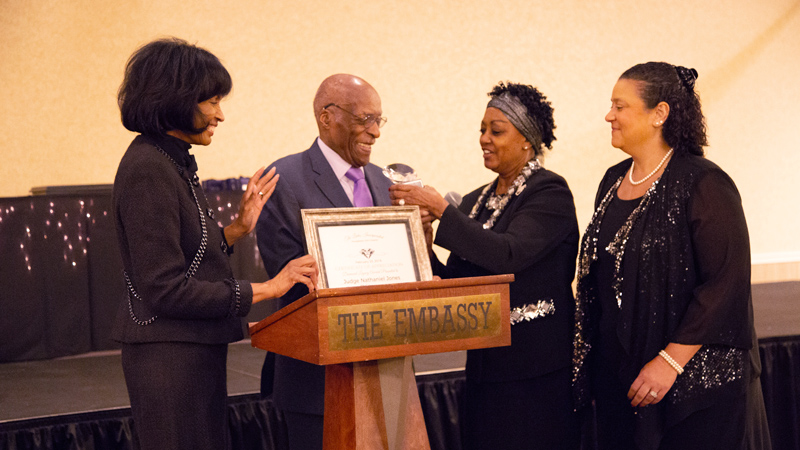 Judge Nathaniel R. Jones remembers Brown v. Board of Education, the landmark 1954 U.S. Supreme Court decision that outlawed school segregation, and how, a year later, the local chapter of a nonprofit women’s organization formed to help people adjust to major changes the country was about to endure largely because of it.

“It was to carry out the transition the country was to face with Brown. Many communities had to rethink what was possible, and Links was instrumental in helping to educate citizens on their obligations as citizens. I associate Links with Brown … and the changes that were possible,” he said about one of the Youngstown Chapter of The Links Inc.’s early goals.

The local women’s service organization was chartered in 1955 to enrich and sustain the culture and survival of those of African ancestry in Mahoning and Trumbull counties while promoting entrepreneurship, philanthropy and community-building, its website says.

Acting as master of ceremonies was Ernie Brown Jr., a columnist and regional editor for The Vindicator, who called the 92-year-old judge “a true beacon of success in our community.”

In addition, Mahoning Valley businessman Herb Washington, the event’s honorary chairman, was among about 50 area doctors, lawyers, musicians and other black men who received awards for their entrepreneurship, philanthropy, community contributions and volunteerism, as well as serving as role models and mentors.

Judge Jones, a South High School graduate who retired from the 6th U.S. Circuit Court of Appeals in Cincinnati, served two years in the Army Air Corps before earning a law degree in 1956 from the Youngstown College Law School. He also served as a Fair Employment Practices Commission executive director, was appointed U.S. attorney for the Northern District of Ohio in Cleveland, served as general counsel for the NAACP and was nominated by President Jimmy Carter to the U.S. Court of Appeals in 1979.

In 1993, he was part of a team of observers for South Africa’s first democratic elections and met with Nelson Mandela, that country’s longtime political prisoner who because its first democratically elected president.

The longtime judge was given his award for being “a pioneer, a trailblazer with a landmark of distinctive contributions that have lifted our city, our region and its people to greater heights,” said Ruthie D. King, program chairwoman.

Proceeds from the four-hour event will be used to take Youngstown high-school and community-college students on tours of historically black colleges and universities, including Howard University in Washington, D.C.; Spelman and Morehouse colleges, both in Atlanta; Hampton University in Hampton, Va.; and Tennessee State University in Nashville, King noted.

About 35 percent of black college graduates attended such universities and colleges, which are “affordable and attractive choices when looking at higher-education options,” she continued.

“If not for you, I wouldn’t be standing here as the 51st mayor of Youngstown,” Jamael Tito Brown said of Judge Jones, adding the judge left an indelible imprint on his life.

Brown also gave Judge Jones a key to the city for the progress he said the judge has helped Youngstown make.

Emulating the examples of Judge Jones and the Diamond recipients is vital for civic engagement, and “hopefully this will inspire other young people to serve as well,” said Ohio Secretary of State Frank Larose, who gave commendations to Judge Jones and Marge Staples, the local Links chapter’s president.

“He’s a blessing to the community,” said Staples, who estimated that about 700 people attended Saturday’s program.

Part of community building also entails being more compassionate toward one another, toning down anger that too often leads to violence and staying true to oneself, regardless of naysayers and the obstacles life can present, explained Washington, who is the largest owner of McDonald’s restaurants in the area.

“Be yourself in a world that’s constantly trying to make you into something else,” he advised.

Despite feeling “overwhelmed” about having received his award, Judge Jones said he’s also concerned about today’s more overt racism, one of the forces he feels is undermining progress the U.S. has made since the turbulent days of the modern civil-rights movement.

“I’m concerned about attempts to turn back the clock to prior to 1955, and we have to do all we can to see that it’s not successful,” said Judge Jones, who added that his Legacy Award “is something I will treasure for the rest of my days.”