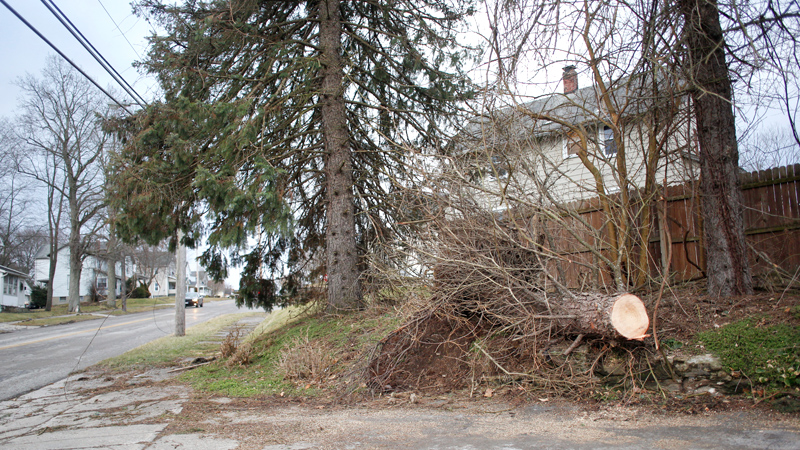 Wind gusts recorded up to 60 mph Sunday at the Youngstown-Warren Regional Airport in Vienna wreaked havoc in the Mahoning Valley, bringing down trees and power lines and leaving thousands without power.

No serious injuries, however, were reported from the wind storm.

Ohio Edison crews have been working since about noon Sunday to restore power when a calm day weather-wise turned into a tiger with high winds making it a dangerous and difficult task, an Ohio Edison spokesman said.

In addition to bringing down power lines and utility poles, falling trees damaged property and endangered people whose homes were hit.

One of the hardest-hit communities in Mahoning County was Struthers, which Ohio Edison said at about 4 p.m. Sunday had suffered 1,193 of the county’s 3,684 outages.

Liberty Township was also disproportionately hit, having 1,600 of Trumbull County’s 3,530 outages at mid-afternoon, according to Ohio Edison.

Struthers Mayor Terry Stocker said trees are down all over the city disrupting power.

The Youngstown Fire Department dispatcher said wires and trees were down all over the city.

The Ohio Department of Transportation reported that state Route 534 was temporarily closed between U.S. Route 224 and Hoyle Road due to trees downed by the wind. Other roads in the Valley also were impassible from downed tree limbs and branches.

The Ohio Turnpike and Infrastructure Commission placed a travel ban on the highway for certain large vehicles from Toll Plaza 2 to Toll Plaza 161 through early Monday.

An Ohio Edison spokesman said that several more hours of high winds were expected overnight and early Monday, but that crews are available as soon as “Mother Nature” allows them to work.

As long as the wind is blowing, it’s best not to have people in the air, he said.

Despite the elements, crews have made progress in reducing the number of outages.

The 4 p.m. Sunday forecast from the National Weather Service in Cleveland said the high wind warning would be in effect until 7 a.m. Monday.

The NWS predicted a chance of snow showers Sunday night with little or no accumulation; and windy and much cooler with lows around 19 and winds out of the west from 20 to 30 mph and gusts up to 60 mph, decreasing to 50 mph after midnight.

The winds will continue to subside on Monday, with gusts up to 45 mph.