In Warren, DeWine offers hope for kids, Lordstown plant, but not offering cash 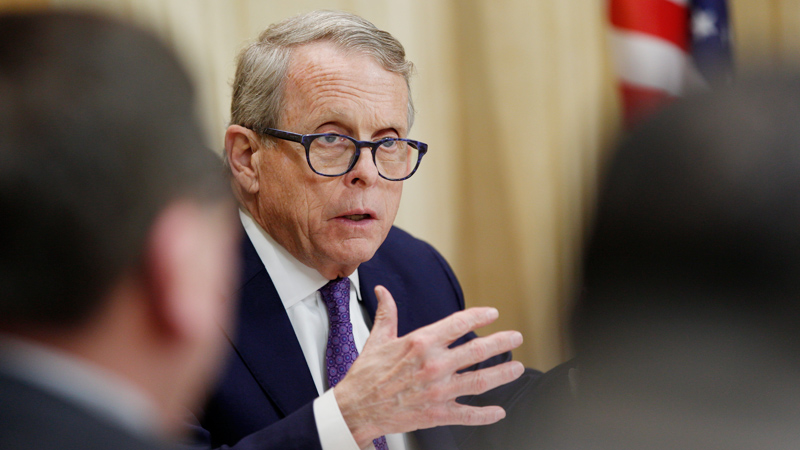 Gov. Mike DeWine told a gathering of about 70 Mahoning Valley officials his trip to the General Motors headquarters in Detroit just after taking office suggested GM is “involved in actively looking for another company” to take over GM Lordstown Assembly Plant facilities due for closure next month.

He and Lt. Gov. Jon Husted brought a few Cabinet members with them for a roundtable discussion at the Covelli Enterprises offices on East Market Street. The main participants around the table were the nine mayors of the Mahoning River Corridor Mayor’s Association from Trumbull and Mahoning counties, but there were other mayors and local and state officials there.

DeWine’s office will assist GM or whatever company “with state money, state resources to make that work for them,” he said. State officials “continue to talk to them and stay in touch with them and make sure they understand if it gets to the point where there is another company, we need to be involved early, because we need to be able to tell that other company, ‘Here’s what we can do.’”

His remarks were in response to a question from state Sen. Sean O’Brien of Bazetta, D-32nd, after O’Brien asked about GM Lordstown and told the Republican governor he was “encouraged by some of the things I’m hearing here today.”

O’Brien said, however, it’s a concern that “we don’t lose out to the ‘Three Cs,’ because that’s something that has consistently been our problem. We lose out to Columbus, Cincinnati and Cleveland, and our problems are just as great as theirs.”

DeWine showed a photo of his newest grandchild during the 90-minute meeting, saying he wants to focus more resources on children from birth to age 5. “We have kids growing up in tough circumstances,” he said.

“I’m so glad you are putting children first,” she said. “Our children don’t have lawyers in the Statehouse.” DeWine thanked her for her advocacy. “We really need your thoughts and ideas,” he said.

The mayors spent much of their time talking about having dams removed from the Mahoning River. They circulated a professionally designed handout, calling it the “river of opportunity.”

It mentions the nine mills that once produced steel along the river and says the dams “must now be removed to accelerate the cleaning of the river and redevelopment of its communities.”

It says there should be a “Mahoning River State Park,” an idea DeWine seemed to enjoy hearing about.

It was clear the commissioners from both counties were mostly focused on having the governor restore Local Government Funds to their budgets.

“We certainly would not rule that out,” DeWine said when Trumbull Commissioner Dan Polivka broached the subject. “One of the things I can tell you – and I never want to overpromise – [there are] a number of initiatives that I think will directly impact counties, that will give you money. It may not be through restoration of Local Government Funds, but it will be for things like children services.”