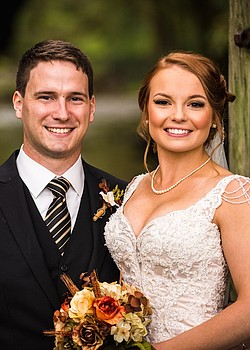 Mariah Bree Moss and Samuel John Fiumara, both of Howell, Mich., were married at 3:30 p.m. Sept. 22, 2018, during a ceremony that was officiated by Ruth Sternberg. The ceremony and reception took place at the Rockmill Brewery in Lancaster.

The bride is the daughter of Suzanne Moss of Logan and the late Charles Moss.

John and Sandra Fiumara of New Middletown are the groom’s parents.

The bride wore a sleeveless trumpet-style gown of Alencon lace on tulle over satin with hand-beaded, scalloped, lace straps. The sweetheart neckline was draped with beads, and the low-scooped illusion lace back bodice was detailed with crystal buttons. The scalloped hemline fell to a chapel-length train.

Emily Tedford was the maid of honor. Wearing olive-green gowns, bridesmaids were Amy Fiumara, sister-in-law of the groom, and Angelina Davis, the groom’s sister.

Alexandria Fiumara, niece of the groom, was the flower girl. She wore an ivory dress with a copper sash.

Best man was Ryan Quimby. Dominic Fiumara, brother of the groom, and Zachariah Davis, his brother-in-law, were groomsmen.

Mrs. Fiumara graduated from Ohio University with a bachelor’s of business administration degree in marketing and organizational leadership. She also is pursuing a master’s degree in higher education and student affairs at Eastern Michigan University. She is the student affairs program manager at the University of Michigan in Ann Arbor, Mich.

Mr. Fiumara graduated from OU with a bachelor’s degree in mechanical engineering and is a design-release engineer for Sumitomo Electric Wiring Systems in Farmington Hills, Mich.

The couple honeymooned in Maderia, Portugal, and reside in Howell.