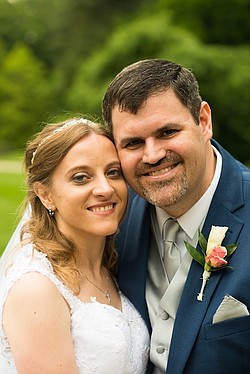 Jennifer Jablonski and Jason Vinkler were united in marriage at 1 p.m. June 23, 2018, at St. Edward Church in Youngstown. The ceremony was officiated by the Rev. Richard Murphy. Concelebrants were the Rev. Joseph Jablonski, the Rev. Frank Lehnerd, Monsignor Robert Siffrin, the Rev. Melvin Rusnak and the Rev. Shawn Conoboy. A reception took place that evening at Mr. Anthony’s in Boardman.

Parents of the newlyweds are John and Jodie Jablonski of Liberty and Jim and Trudy Vinkler of New Middletown.

The bride wore an A-line gown with a sweetheart neckline, lace-trimmed skirt and beaded appliques with a buttoned-down back.

The flower girl was Kathleen Aulisio, goddaughter of the groom.

The ring bearer was Grady Aulisio.

Mr. Vinkler is the assistant news director at WKBN-TV 27 in Youngstown.

The couple reside in Austintown.