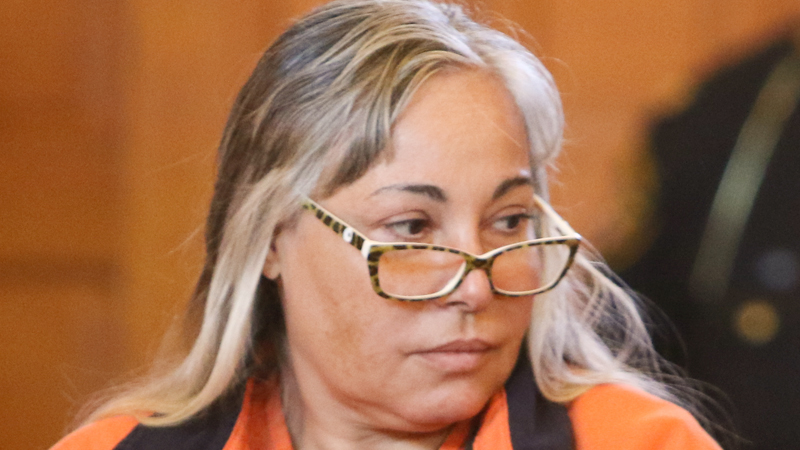 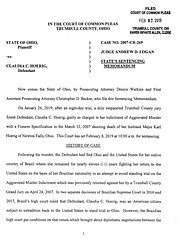 Trumbull County Prosecutor Dennis Watkins assured the Brazilian government that Claudia Hoerig would not receive the death penalty or a firm term of life in prison if convicted in the ambush-style murder of her pilot-husband.

Extraordinary communications circulated among the U.S. State Department, Trumbull County Prosecutor Dennis Watkins and a Brazilian prosecutor in 2017 that finally allowed Claudia Hoerig to be returned to the United States to face trial.

The details of those communications were included in a sentencing memorandum prosecutors filed Thursday in her case. It’s the first time prosecutors have acknowledged publicly that such an agreement was in place.

The Vindicator, however, exclusively reported several weeks ago that a Brazilian legal magazine and the British Broadcasting Corp. said such an agreement was a condition of Claudia being returned to Ohio. When the communications were done, Watkins and the United States had pledged to seek no more than 30 years in prison for Hoerig if she were convicted of the 2007 killing her husband, Karl, in their Newton Falls home.

Watkins said Thursday because of a gag order in the case, he would not comment until after today’s sentencing hearing as to why he did not reveal the agreement before now.

Claudia Hoerig fled to her native Brazil after the killing and remained free there until the Brazilian government stripped her of her Brazilian citizenship and arrested her April 20, 2016. The decision was formalized in March 2017.

Judge Andrew Logan of Trumbull County Common Pleas Court will sentence Hoerig, 54, at 10 a.m. It’s up to the judge, but Watkins asked in the memorandum that he sentence her to 28 years to life. Under Ohio law, she could get as much as life in prison without parole.

Discussions regarding limiting her sentence began March 29, 2017, when Watkins received an “unannounced long-distance phone call from Vladimir Aras,” a federal Brazilian prosecutor regarding “the possible extradition of Claudia Hoerig back to the United States,” Watkins said in the memorandum.

One of Brazil’s concerns was that Hoerig not be subject to the death penalty or life in prison without parole. Watkins clarified that she was not indicted on charges that could produce the death penalty, nor would she be.

Watkins explained that he had no authority to limit the penalty, but one possibility was a sentence “where she would be eligible for parole within a 30-year period.”

Additional discussions took place over the next several months, until John M. Gillies of the U.S. Justice Department wrote to Watkins Sept. 15, 2017, proposing that Watkins offer a promise to ask the Ohio Parole Board for parole after 30 years in prison if convicted.

The Brazilian government insisted on this because Brazilian law does not allow for sentences longer than 30 years.

Brazilian President Michel Temer and the Brazilian Minister of Justice gave the final OK to the agreement, Watkins said in the memorandum.

There were still details to finalize. The Justice Department sent Watkins an email and letter March 9, 2018, confirming that Watkins would “take all reasonably available steps to satisfy the assurance ... that Hoerig will serve no more than 30 years’ imprisonment,” according to a copy of the document filed with Judge Logan.

Watkins also agreed to recommend that Hoerig get credit for nearly two years she was jailed in Brazil and the one year she’s been in the Trumbull County jail.

A Trumbull County jury found her guilty of aggravated murder Jan. 24 after a nine-day trial that included three hours of jury deliberations.

Watkins’ memorandum asks Judge Logan to honor the promise Watkins made to the Brazilian government.

Watkins said he believes she gave “false evidence to the jury” in her trial and “never showed or expressed one ounce of remorse for what she had done to her husband, Karl Hoerig. He was ambushed, shot in the back like a sitting duck in cold blood.”

Watkins said the “unique circumstances” of Hoerig’s case led to the promise to try to limit her sentencing after the Brazilian Supreme Court in 2016 and 2017 “put conditions,” on her return to the United States.

When Hoerig was arraigned on the murder charge a few days after her return to Ohio last year, Watkins and Peter Elliott, U.S. Marshal for the Northern District of Ohio, were asked what finally triggered her return to the United States.

Watkins and the others said they could not discuss it but praised the cooperation among local and federal officials over more than a decade.