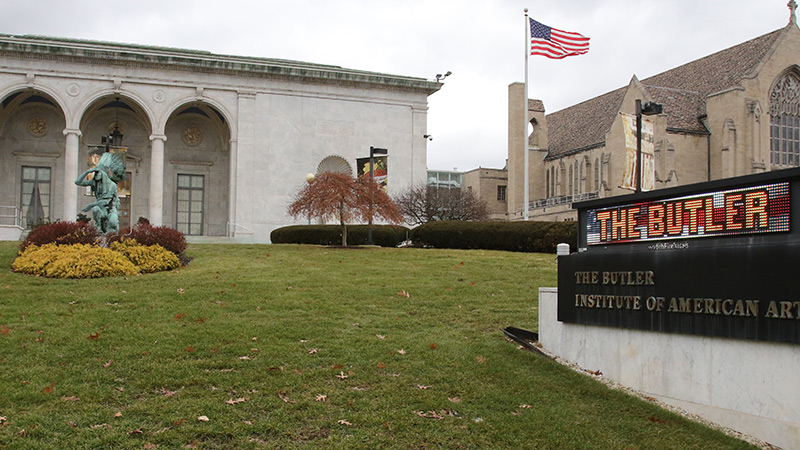 Controversy mounts at Butler over fate of Rockwell paintings

The Butler Institute of American Art became a target for criticism in the past week after its board’s decision to back out of a deal to display a collection of Norman Rockwell art became public.

“We’ve been through hell lately,” said Louis A. Zona, museum director. “There has been a lot of misinformation.”

The issue arose when the Butler’s board of directors voted last month to hold off on a deal to bring a collection of works owned by Boy Scouts of America, including 66 paintings by the late Rockwell, to the museum.

The $113 million collection was to be sent from its current home in a storage facility in Irving, Texas. The art was previously kept at a BSA museum in Texas, which is being closed.

The Butler was to display the paintings from the collection, which also includes illustrations, at the main and Trumbull branches for two months, and then store and insure them for up to two years, after which the arrangement could be extended.

“It was never a donation but a temporary exhibition being offered to us, which needed to be temporarily put on hold,” said Zona. “If the collection [was] actually offered to us as a gift, I’m sure that we and other institutions would have jumped at it. We were offered the collection only to be exhibited and stored for possibly two years. We certainly would never have turned down an outright gift of Rockwell’s work.”

The paintings and illustrations were created by Rockwell early in his career, when he did work for the BSA. They were used in scout publications and manuals, and as magazine covers. The artist, who died in 1978, would later become renowned for his paintings.

The deal had been approved in the second half of last year, but the Butler board backed away from it in reaction to national news reports the BSA could face legal and financial challenges from past allegations of child abuse by Scout leaders.

The organization is considering filing for bankruptcy partially due to costs from lawsuits over the sex-abuse allegations, according to a Dec. 12 article in The Wall Street Journal.

The board feared it could face a backlash from donors and the public over the art, as well as the cost of shipping the artwork back to the BSA if ordered to do so by a judge, so it halted the deal.

“The trustees decided that caution was in order,” said Zona.

The deal with the Butler would have saved the BSA money by eliminating the cost of maintaining and storing the art collection.

The Butler’s decision sparked a public spat prompted by criticism from board members and others.

Critics claimed the deal reversal amounted to censorship and even indicated it was opposed to scouting and even Rockwell – a charge Zona said is ridiculous.

“It’s just a deal that didn’t happen,” he said. “We love Rockwell, and we love scouting.”

Zona also said the deal is not dead, but merely on hold.

The museum board agreed to revisit the deal in a year or so.

The Butler already has one Rockwell; it acquired a massive piece titled “Lincoln the Rail Splitter” in 2006 at a cost of $1.6 million.

“We already have the best Rockwell in the world,” Zona said.

The Rockwell paintings in the BSA collection are all similar in their depictions, he noted.

Board member Atty. Ned Gold, who has had a lifelong connection to the BSA, was instrumental in luring the collection to the Butler. He was disappointed when the board backed out of the deal.

“They were worried it was going to cause people not to donate to the museum ... because the Boy Scouts owned it,” he told The Vindicator.

Gold called the board’s fear of the pedophilia link “irrational” and said he hopes to call an emergency board meeting to reverse the decision.

“The BSA isn’t going to wait a year, and we’re going to lose a collection that would bring people in from all over this part of the country,” he said.

The Butler has an annual budget of a little more than $2 million.

Because admission to the museum is free, revenue comes from hundreds of regional donors, grants from foundations and government agencies, and sales from the gift shop and its annual holiday craft and art show.

In a message to The Vindicator, Butler board president Thomas J. Cavalier defended the decision.

“The Butler trustees discussed at length the pros and cons of the arrangement with the BSA, including all that would be involved with a possible quick return of the paintings [if ordered by a bankruptcy court] and the burden it would place on our staff,” said Cavalier in the statement. “The board carried out its fiduciary responsibility to protect the interests of the Butler and voted overwhelmingly to delay any arrangement with the BSA involving their art collection at this time.”

John Anderson, a director of Foundation Medici, which funded construction of the Howland branch, penned a letter of objection to Cavalier over the board’s decision, and widened the scope of criticism.

“This was basically an action on the part of the Butler which has pushed ... issues that we already had with the operation of the branch, which has not been, in any way, up to the expectations that were had about the Butler and its commitments,” he said.

But former Butler board member and benefactor Jeffrey P. Draime issued a statement to the board in which he declared his family’s firm support for the Rockwell decision.

“The Draime family has had a unique relationship with the Butler, one that we have valued very highly and intend to continue for years to come,” he said. “My father, David Max Draime, embraced the mission of the Butler and did much to further its success: as a long-time member of the board, as a donor, a visionary and as a trusted mentor to the director and Butler staff.”

David Draime donated the land and provided much of the funding needed to build and operate the Butler branch in Howland. He also created and largely endowed Foundation Medici to help facilitate the branch’s operation.

In addition, the Draime family has underwritten many Butler events in Howland and Youngstown and hosted other Butler events and visiting artists.

“We find the recent news articles... and inflammatory language concerning the Butler and a collection of Norman Rockwell art very disheartening,” wrote Draime. “Reasonable people can disagree about the Butler board’s decision to table the opportunity of acquiring the Rockwells, but the board had every right to decide as they did.

“As a former trustee on the Butler board and still knowing several people on the current board, I am satisfied that they met their fiduciary obligations, arrived at their decision in good faith having considered a number of variables, and did what they thought was best at the time. It is important to note that the possibility still exists for the Rockwells to be obtained.

“It was very discouraging to have read a number of the comments from the articles. My family strongly rejects the notion of censorship attributed to the Butler and consider it potentially damaging to an institution that has provided so much to our communities over the years.”

“Disagreeing with the decision is one thing,” wrote Draime. “Attributing the worst motives to the decision process in a public forum is a disservice to all involved.”