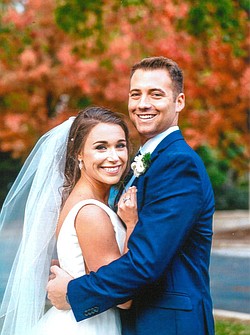 Lindsay Eddingfield of Powell and Eric Davis of Dublin were united in marriage at 2:30 p.m. Oct. 20, 2018, at St. Brigid of Kildare Church in Columbus. The ceremony was officiated by Deacon Frank Iannarino, and a reception took place that evening at the Hilton Columbus at Easton.

Cindy and Don Eddingfield of Dublin are the bride’s parents.

The parents of the groom are Anne and Larry Davis of Canfield.

The bride wore an ivory A-line gown with a satin bodice and layered tulle skirt. A cathedral-length train completed her ensemble.

The responsibilities of maid of honor were shared by Cailey and Lauren Eddingfield, sisters of the bride.

Mrs. Davis graduated from D’Youville University with a master’s degree in occupation therapy. She is an occupational therapist at Oakstone Academy in Columbus.

Mr. Davis graduated from Case Western Reserve University with a master’s degree in accounting and is a certified pubic accountant with Safelite Auto in Columbus.

The couple honeymooned in Punta Cana, Dominican Republic, and reside in Columbus.