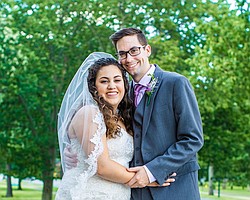 St. Charles Borromeo Church in Boardman was the setting for the 1:30 p.m. July 27 wedding of Lisa Navarro and Alex Barnes. The Rev. Gerald DeLucia was the officiant, and an evening reception took place at Mr. Anthony’s Banquet Center in Boardman.

Nelson and Mary Ann Navarro of Youngstown are the bride’s parents. The groom is a son of Jeff and Suzanne Barnes of Strongsville.

After a honeymoon in Mexico, the couple reside in Cleveland.

The bride wore an ivory, mermaid-style gown adorned with lace and beading.

Mrs. Barnes graduated from Ohio State University with a bachelor’s degree in business, operations and logistics. She is a black-belt consultant at Cardinal Health.

Mr. Barnes graduated from Ohio State University and earned a master’s degree from Ohio Dominican University. He is a physician assistant at the Cleveland Clinic.