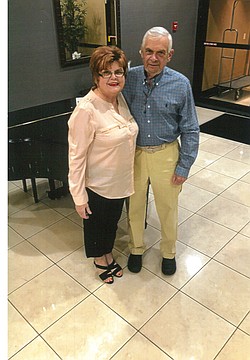 Thomas and Diane Hammar of Poland recently celebrated their 50th wedding anniversary during a surprise dinner at the Welshfield Inn in Burton. The event was hosted by their children.

The couple’s children are Michael Hammar of Brecksville and Marcie (Kevin) Martin of Vienna, Va. Their two grandsons, Brooks and Jake Martin, complete the family.

Mrs. Hammar was a first-grade teacher in the Struthers City School District until she retired in 2005 after 35 years. She now visits schools and nursing homes with her therapy dog, Carlie.

Her husband retired in 2012 from Giant Eagle where he worked for 39 years as an I.T. Coordinator. He also served in the U.S. Marine Corps from 1958 through 1961. Mr. Hammar meets monthly with his former polo friends.