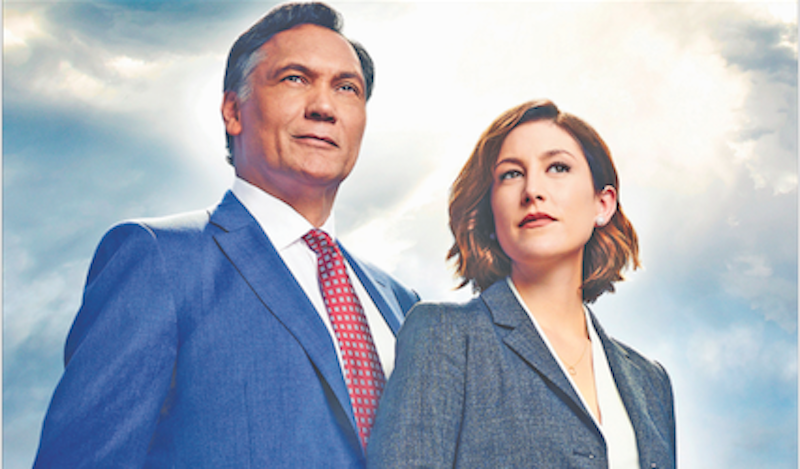 Here’s your guide to the new shows debuting this fall.

What do socks and a heart attack have in common? The title of this new comedy, of course. Billy Gardell stars as a man in the compression sock biz who falls for his nurse (Folake Olowofoyeku) while recovering from a cardiac event. Tune in to see if she flatlines his attempts to win her over.

Court is now in session. Lola Carmichael (Simone Missick) drops the hammer on the justice system and crime as she takes the bench, pushing the boundaries of what a judge can be.

A criminal psychologist (Tom Payne) has more than enough qualifications to help the NYPD solve their cases. Did we mention his father (Michael Sheen) is an incarcerated serial killer? Bellamy Young and Lou Diamond Phillips also star.

No bluffing. Jimmy Smits returns to TV as a lawyer who looks to reconnect with his daughter (Caitlin McGee) by asking her to rejoin his firm. They just might change the world – if they can get along.

In this “black-ish” sitcom spinoff, Rainbow Johnson recounts her experience growing up in the ’80s in a mixed-race family. Stars include Arica Himmel and Mark-Paul Gosselaar.

A girl (Alexa Swinton) with no memory of who she is or where she came from is at the center of a mysterious larger-than-life conspiracy being investigated by a local police chief (Allison Tolman).

Wade (Walton Goggins) is a devoted father and widower who is clueless about the dating scene. With surrounding women seeing him as a hot commodity, Wade’s family and friends help him find love once again.

A former Princeton music professor (Bradley Whitford), whose life has hit a sour note, may have just found the boost he needs when he stumbles upon a small-town church choir that desperately needs a tune-up – in more ways than one.

A new career is just what the doctor ordered for Patricia Heaton as she stars as a woman in her 50s who pursues her dream job, while swallowing the fact that she’s much older than her peers.

A group hoping to become American citizens hires former New York City Councilman Garrett Modi (Kal Penn) to help them achieve their dream. Since losing it all politically, Garrett must rediscover his purpose in life.

Psychologist Kristen Bouchard (Katja Herbers) doesn’t believe in the supernatural but she’s about to get a nightmarish conversion when she joins forces with a Catholic priest-in-training (Mike Colter) as they investigate the church’s unexplained mysteries.

Kristen Wiig and Maya Rudolph lend their voice talent to this animated comedy series about a Southern family struggling for status and wealth but rich in friends, family and laughter.

Julia Bechley (Brittany Snow) thought she was an only child until her father (Timothy Hutton), a prize-winning fertility doctor, reveals that he helped conceive more than 100 children through his clinic.

You never know what’s going to come out of the mouths of babes! Tiffany Haddish hosts as the young participants explain the rules for everything from sportsmanship to dating.

Three years after the Caped Crusader goes missing, his cousin Kate (Ruby Rose) returns home to help her family and the city Gotham by taking on the role of the Dark Knight to restore order and justice.

A brilliant teen (Kennedy McMann) known for solving mysteries has her college plans derailed by her mother’s untimely death. Now a suspect herself after a socialite is murdered, Nancy must team-up with four other peers to find the real killer and clear her name.

The Wonderful World of Disney Presents The Little Mermaid Live!, 8 p.m. on ABC

Auli’i Cravalho (“Moana”) goes under the sea as Ariel, the mermaid princess with a fascination for life on dry land, as the classic story gets reimagined for a live studio audience. Shaggy and Queen Latifah also star.

Dancing With the Stars (ABC)

How to Get Away With Murder (ABC)

Fresh Off the Boat (ABC)

All American (The CW)

The Flash (The CW)