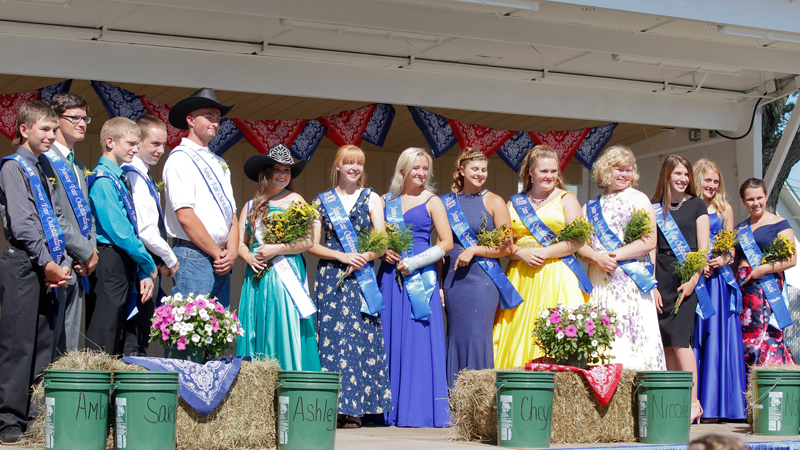 Natalia Kresic may soon be removing the crown from her head, but its symbolism and deeper meaning likely will remain lodged in her heart and soul for much longer.

“It’s helped me grow as a leader and as a person. It teaches you to love, to think and live your life,” the 16-year-old Warren girl said about her experiences as a 4-H member.

Largely for her 4-H and community-service efforts, a shocked but thrilled Kresic was crowned as this year’s 4-H Queen during a Youth Day ceremony Thursday afternoon at the Canfield Fair.

The 2019 4-H King was James Moore, a 2019 South Range High School graduate and member of the Springfield Booster Boys 4-H Club. Both were selected from a field of 11 competitors.

“I’m definitely going to give back to the 4-H community and encourage people to join. It’s more than about livestock; it makes for better youth,” observed Kresic, a Lordstown High School junior who takes classes at Youngstown State University as part of the university’s College Credit Plus program, a dual-enrollment effort that allows certain middle- and high-school students to receive high-school and college credit.

Also sharing in the revelry were her parents, Matt and Windi Kresic, who praised their daughter’s strong work ethic and character development largely as the result of her four years in 4-H.

“It’s an overwhelming feeling and sense of accomplishment. It’s the ultimate goal,” said Moore, who has on his radar screen majoring in agronomy and animal science at OSU.

For his part, the college freshman intends to study agriculture, then return to manage his family’s farm, said Moore, who also looks forward to continuing to give back to the 4-H community.

Also during the ceremony, Sydney Lewis and Thomas Kemp were named the female and male Outstanding Youth winners, respectively.

“It’s the icing on the cake,” said an emotional Lewis, who is a YSU sophomore majoring in biology and a member of the Blue Ribbon Wranglers and Country Kids and Kritters 4-H clubs. “I’m ready to pass this on to the next generation and inspire them to be the best versions of themselves they can be.”

A more stoic Kemp said his Outstanding Youth achievement was part of the overall gratitude he feels toward the fair, which he called “a happy place.”

His next main goals include attending OSU’s Agricultural Technical Institute in Wooster to study agronomy and working for Deerfield AG Services in Deerfield, the 2019 West Branch High graduate said.