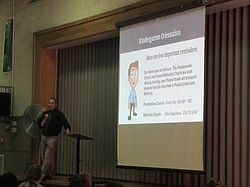 Neighbors | Jessica Harker .Parents gathered in the gym at Poland Union Elementary School listening to principal Mike Masucci as he discussed the details regaurding the start of school on Aug. 19 during the school's Kindergarten Orientation. 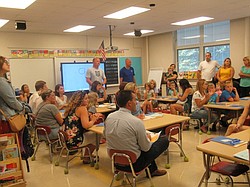 Neighbors | Jessica Harker .Incoming kindergartners and their parents piled into the students new classrooms to meet with their teachers during Poland Union Elementary School's Kindergarten Orientation on Aug. 19. 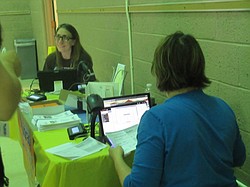 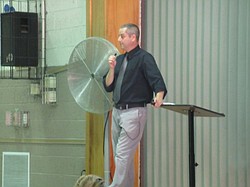 Principal Mike Masucci said that this event was a way for both parents and children to mentally prepare for the big change of starting school.

“In my eyes, the goal is to reduce or minimize anxiety for both kids and their parents,” Masucci said.

The event started with a meeting of parents and students in the school’s gymnasium.

Incoming kindergartners separated from their parents, breaking into their five separate classrooms to meet their teachers.

Masucci then addressed the gymnasium full of parents, discussing bussing and how best to reduce stress on the first day of school.

“I encourage all of you to put your child on the bus for the first day,” Masucci said. “Even if you plan to drive them the rest of the year, it makes the transition on the first day much easier.”

After Masucci’s presentation to parents they were able to join their students in their parents classrooms.

Parents had the opportunity to meet with their students teachers and discuss the students weekly schedule.

“The nice thing is the teachers were working to inform the parents without the kids in the room,” Masucci said. “That way the teacher is telling the parents about the classroom structure.”

While parents talked to the teacher, students toured the school for the first time.

“We are so excited to start a great new year,” said kindergarten teacher Kirsten Jacobs.

Along with orientation, parents were able to take their students to Poland Seminary High School later that day for bussing practice.

The Poland school district set up busses for students to practice getting on and off, as well as get a practice ride around the community.

“It’s all about taking that reduction of stress one step further,” Masucci said.