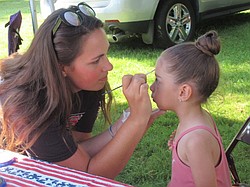 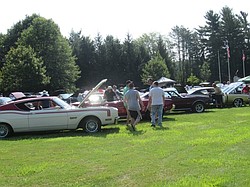 Neighbors | Jessica Harker .More than 400 cars were on display at the Cars in the Park car show at Boardman Park on Aug. 4 hosted by the Olde Car Club. 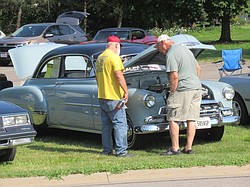 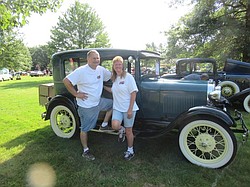 Neighbors | Jessica Harker .Bill and Stephanie Shaw, three-year members of the Olde Car Club, had a car on display at the groups annual charity car show on Aug. 4. 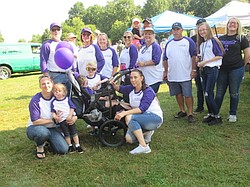 Neighbors | Jessica Harker .The family of Harper Dravet was present at the Cars in the Park Show at Boardman Park where the Olde Car Club organized the show to raise money for Dravet.

This year, the show raised money for Harper Foley, a local 5-year-old with Dravet Syndrome, a rare form of epilepsy.

Publicity Director Fred Ross said that the club has raised about $100,000 throughout the last several years for community members in need.

“This show has helped a lot of people in the community,” Ross said.

Harper’s mom, Jade Foley, said that the club reached out to her about sponsoring the event in Harper’s name.

“They said they wanted to do something to help,” Foley said. “We were very grateful for the support from the community.”

Harper was born with Dravet Syndrome, having suffered from her first seizure before she was 4-months-old.

Ross said that the organization was able to raise at least $35,000 last year when they sponsored Nora Sabella, a child from Poland with Neuroblastoma cancer.

“We do a lot through out the year to try to raise money for the community,” Ross said. “But when we host the show we always raise more.”

The show hosted more than 400 cars this year, in a variety of categories including street rods, sports cars, antiques, newer cars, trucks and more.

“There is almost no car we wouldn’t be willing to accept,” Ross said.

The show also hosts a 50/50 raffle and a baked goods sale.

Member Kris Caiazza said that the bake sale is a staple of the car show, with members selling more than 50 types of treats throughout the day.

“We have always had the bake sale,” Caiazza said. “Some are homemade and some are store bought but all of them are really good.”

She said that this year was special because the aunt and grandmother of the sponsor, Harper Foley, volunteered to bake and help run the bake sale throughout the day.

“It’s really special and so nice to have them here with us,” Caiazza said.

New to the show this year the club also sponsored a kids corner, where children can get their face painted as well as receive a free coloring book, crayons and a cook that are all car themed.

Ross said about a dozen vendors will also be selling their wares during the show.

“It’s a tradition with the group and it really brings everyone together,” Ross said.