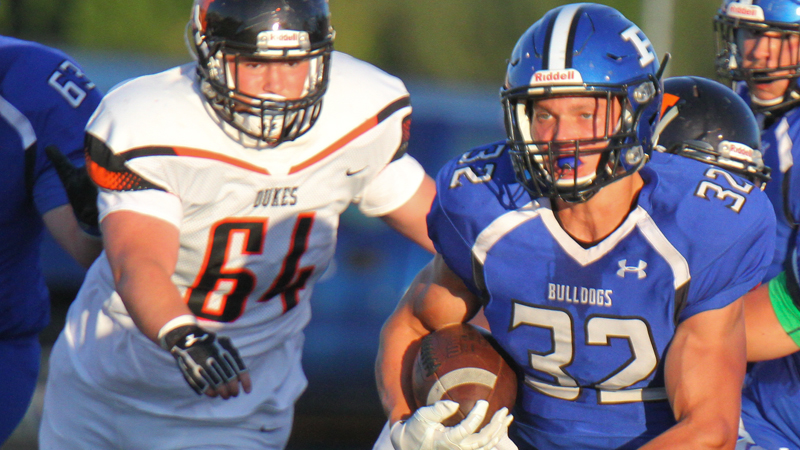 Then things got crazy in Poland’s 24-23 win on Thursday.

Dukes ace quarterback CJ Greiner hit Andrew Carr on a 42-yard bomb to make it 24-17. The Dukes then recovered an onside kick at midfield. Ten plays later, Anthony Sabatino scored on a 14-yard run with 1:22 remaining.

Two Poland timeouts later and with momentum on their side, the Dukes gambled by going for two.

Poland junior defensive back Dean Gessler made the play of the game by picking off Greiner’s attempt to his favorite target, Ryan Cooley, in the end zone, the first interception of his varsity career.

“I lined up on the inside of him and I was just expecting [the ball] to come my way, hoping to God I was able to make the play,” Gessler said. “I saw him break down so I turned inside of him.

“Once I got my eyes on the quarterback, I saw the ball coming right towards me and I had to just react to the moment.

“It was in slow motion, like the whole world froze around me,” Gessler said. “Once I caught the ball, it felt amazing.”

The first half was a defensive struggle, with the Dukes taking a 3-0 lead as time expired on sophomore kicker Macagey Laure’s 42-yard field goal.

Then the Bulldogs surged.

“We started the half with a plan to run the ball and the line did amazing blocking,” Rutana said of the Bulldogs’ 17-point third quarter. “In the first half, Marlington [played] great.”

First the Bulldogs forced a punt that bounced back to the Dukes’ 44.

Four runs later, Rutana scored from the 3 to put the Bulldogs ahead for keeps.

On the Dukes’ next possession, Rutana smacked Greiner, forcing a fumble recovered by Karter Kellgren at the Dukes’ 29. That set up Mikey Kushner’s 21-yard field goal for a 10-3 lead.

“We were able to utilize our guys up front, keep the ball in our hands,” Poland head coach Ryan Williams said of the turnaround. “We had to play keepaway.”

Another defensive stop gave the Bulldogs the ball in Marlington territory. With a boost from an unsportsmanlike conduct penalty on the Dukes, Bulldogs quarterback Brody Todd soon scored from the 1.

“In the first half, we were pushing up the field but Marlington was stopping us,” two-way lineman Nathan Tucker said. “We started running our stack offense and it was working.”

Early in the fourth quarter, Greiner connected with Cooley on an 11-yard touchdown pass.

The Bulldogs gobbled more than four minutes off the clock before Rutana scored again, this time from the 6. He finished with 79 yards on 12 carries.

“They had the momentum,” Williams said. “That was a good call — gutsy call. Good team, they’ve got a great quarterback, they rolled the dice.”

“We clamped up and Dean Gessler made a big play.” Tucker said.