Frieda, 85, to exit, but landmark jazz club to play on 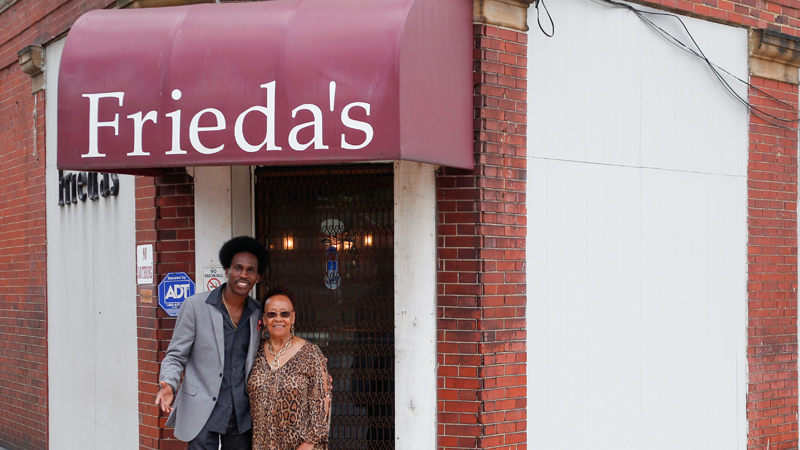 A 2014 video from Frieda's, a popular Youngstown night spot that is home to some serious jazz and blues.

After nearly four decades, Alfreda “Frieda” Anderson Martin is stepping away from the landmark jazz bar that bears her name.

But she’s leaving it in good hands.

Martin has sold Frieda’s to Howard Howell, leader of Howard and the Point Five Band, which has played at the bar hundreds of times – almost every weekend for years. The deal was final on Aug. 10.

It would be hard to imagine a more appropriate person to carry the torch for the triangular bar at Belmont and Rayen avenues that has hosted scores of jazz greats over the years.

Howell is not going to change the name, but he has a lot of improvements planned. Frieda’s is currently closed for remodeling, but Howell plans to have it reopened by late September or early October.

Martin and Howell sat together at the bar earlier this week to talk about what was and what will be.

For Martin, who has owned and operated the bar since 1980, it’s a bittersweet time. But she is ready to move on.

“I have wanted to get out for the last three years,” said Martin, who turned 85 this month. “After 40 years, that’s enough.”

The customers and the music kept the lively businesswoman going.

“i’ve enjoyed it, and met a lot of nice people,” she said. “Plus I love [jazz]. I tried to keep it alive, because it seemed to be dying off.”

Asked to name some of the regional and national artists who played her venue over the years, Martin said “I could think of a few,” and then rattled off more than a dozen: Big Boogie D, Mr. Stage, Teddy Pantelas, Chasin the Blues, Guitar Shorty, Winston Walls, Jack McDuff, Pieces of a Dream, Sean Jones, Clifford Barnes, Maurice More, DJ EZ D, Billy Beck and Rick Ward, for starters.

While Martin isn’t sure exactly what she’ll do next, she is at ease knowing Howell is taking over.

“Howard started coming here when he was 9 years old,” she said. “He would ride his bike down here, and I would let him stand at the door and watch the bands, because I couldn’t let him in because he was too young.

“I’m pleased he is taking over. He’s been with me for a long time.”

For Howell – who calls Martin “mom” – owning a jazz club is a dream come true.

“It’s unbelievable to me that as a kid I would come here and watch my stepdad play, and so many other great musicians,” said Howell. “It’s how I grew into the musician I came to be. All the stars lined up for me. I couldn’t have predicted this.”

Howell said he will build on the foundation that Martin created, and take it to the next level. He will continue to play regularly at the bar, and will also book regional and touring acts.

“I’m going to give musicians a place to show their gift, to continue what Frieda did,” he said. “It will be a place for the young ones who want to get on stage, just like I did, and a place to learn the skills of improvisation. That’s the key to jazz. That’s something they don’t teach in school.”

Howell has never owned a club before, but Martin said she will be around to show him the details.

Martin said Frieda’s is in the last remaining triangle-shaped building in Youngstown. ‘It’s a landmark,” she said, “And I don’t want to see it torn down.”

She lived on the second floor of the building until a year ago.

“This place is magical,” said Howell. “I never realized how historic it is, because I am here all the time.”

When asked how he is going to change the bar, both inside and out, Howell’s eyes sparkled, like a man with a great secret that he can’t yet reveal.

“It’s going to look different but it will fit the style,” is all he would say. “Not even Mom [Martin] will be allowed to see it until it’s finished.”