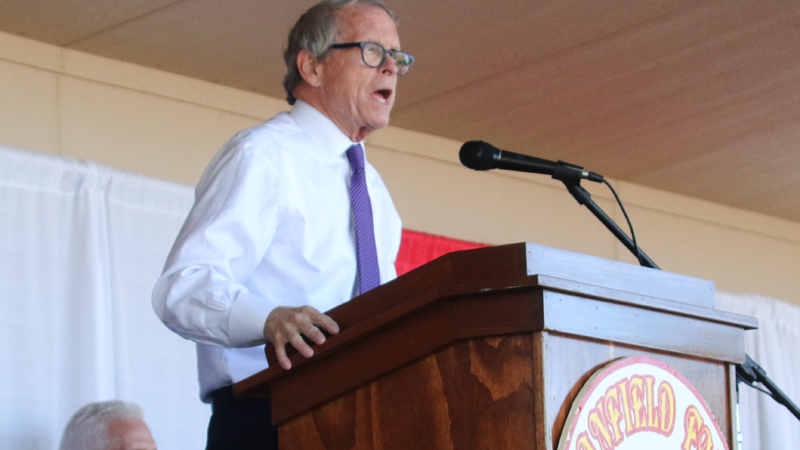 town Motors is “a viable company. I think it can work, but they’ve got to raise the money from the private sector.”

The company needs about $300 million to $500 million to buy, retrofit and operate the Lordstown facility to produce electronic vehicles.

“We made it very clear that we’re going to be very, very open and very generous,” DeWine said. “We’re going to do everything we can to facilitate this. The first step is raising this outside money. We can’t really control that. We know this is important and we’re gong to act accordingly.”

When asked if the company can raise the money, DeWine said, “I can’t speculate on that.” But he added, “We can make it clear that any company that goes in there, we’re going to help them.”

said the package would include “training and other economic incentives. We know how important it is to the Mahoning Valley.”

GM ended production of the Chevrolet Cruze at its 53-year-old Lordstown plant in March, eliminating the last 1,600 jobs left at the facility that employed about 4,500 in 2017.

A GM spokesman has said negotiations to sell the Lordstown plant are progressing, but “it’s a pretty complex transaction.”

Lordstown Motors officials haven’t responded to requests from The Vindicator to discuss the proposal.

He bemoaned the condition of newspapers across the state that are facing turmoil in days of declining revenue and readership, saying the media has “absolutely an essential role” as a “tool for governing.”

“It makes it much harder for a public official to do a job if you don’t have a vigilant media,” he said.

Meanwhile, DeWine said his administration is working with Second Amendment organizations on gun control legislation and hopesthe state Legislature will approve it. He acknowledged concerns by some legislators, but said it’s premature as the any bills to be considered haven’t been written.

After an Aug. 4 mass shooting in Dayton, DeWine called for 17 changes to the state’s gun laws including tougher background checks and a “red flag law” that allows law enforcement to take guns temporarily from those considered dangerous through a court order with due process.

“Everything will save lives,” he said of his proposals.

DeWine was in Boardman Thursday for the Youngstown/Warren Regional Chamber’s Salute to Business breakfast. At the event, the chamber honored:

• James Dascenzo, a principal at HBK CPAs & Consultants as Business Professional of the Year.

• M. Brigid Kennedy, president of Ursuline Ministries, as Non-Profit Professional of the Year.

• Mark LaMoncha, president and co-owner of Humtown Products, as Entrepreneur of the Year.

• Billy Keel, AFL-CIO labor liaison for the United Way of Youngstown and the Mahoning Valley, as the Salute to Labor Achievement Award winner.