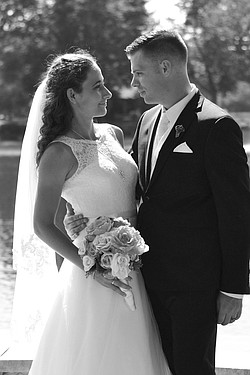 Our Lady of Fatima of Farrell, Pa., was the setting for the July 13 wedding of Ashley Smith and Joseph Mitchell. The couple were united in marriage during a 1:30 p.m. ceremony officiated by the Revs. Jason and Michael Mitchell, brothers of the groom. A reception followed at The Corinthian Banquet Hall & Event Center in Sharon, Pa.

Aaron and Beth Smith of Newark are the bride’s parents, and the parents of the groom are Tom and Tammy Mitchell of Cranberry, Pa.

After a honeymoon in Switzerland, the couple reside in Austintown.

The bride wore a classic A-line gown featuring a sweetheart neckline covered with lace and a long tulle skirt. A satin-ribbon belt and a finger-tip length, dual-layered veil with lace borders completed her ensemble.

Flower girls were Stella, Ani and Lola Dorohoff, cousins of the bride.

Mrs. Mitchell graduated from Youngstown State University with a bachelor’s degree in English secondary education and a master’s in English. She teaches English at Austintown Fitch High School.

Mr. Mitchell is a contractor sales representative at 84 Lumber in Brookfield.