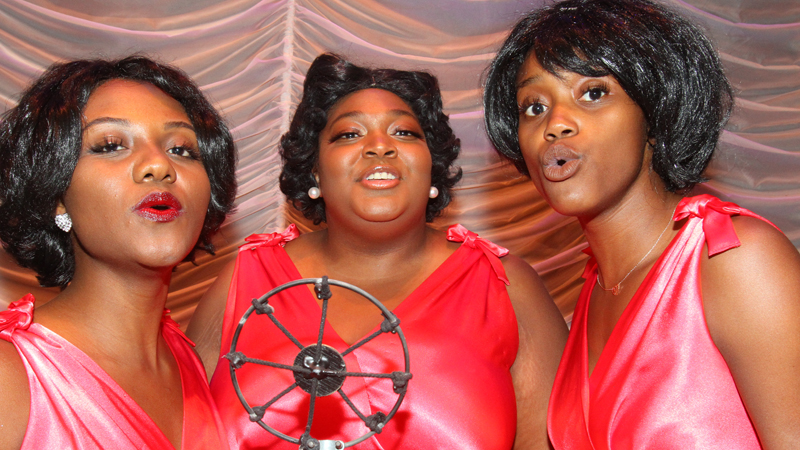 On its face, “Dreamgirls” is the behind-the-scenes story of a girl group’s rise to fame that is loosely based on Diana Ross and the Supremes and record mogul Berry Gordy.

The soundtrack is Motown, and the look is glitz and glamour – concealing the seedy underbelly of the music industry.

But according to Trevail Maurice, who is directing the Youngstown Playhouse’s production of the musical, “Dreamgirls” is about much more. It has many themes, he said, and all of them are as relevant today as they were in in 1981 when the musical premiered on Broadway.

These themes include putting in the work to make the most of your talent and striving for success no matter what hardships come your way.

On another level, the show is a rare slice of the African-American theater canon in which blacks are not the downtrodden, but the stars.

The Playhouse’s production of “Dreamgirls” opens Sept. 6 and will run for six performances over two- consecutive weekends.

At age 22, Maurice is the youngest African-American man to direct a show at the Playhouse. But despite his age, he’s got a lot of experience – and a deep appreciation for “Dreamgirls.”

Maurice has appeared in some of the Playhouse’s biggest shows of the last five years, including “Cats,” “Pippin,” “Hairspray” and “Mary Poppins.”

To Maurice, “Dreamgirls” is a slice of the ’60s – an era that revolutionized American culture and whose effects are still being felt today.

The musical numbers are important to “Dreamgirls,” he said, but there is so much to the show.

It follows three girls who dream of stardom. They meet up with a manager who promises them fame, and eventually delivers it, but it comes in a way that was not what they expected. Trials and tribulations force many changes on the trio.

“What the story teaches us appears to be about the music industry but at its core it’s about basic human relations, just masked by the music industry,” said Maurice. “Once I understood that, I said ‘this needs to be told.’ There is a lot of hate and cruelty going on in America right now, and what this story embodies is hope.”

The stage version draws out the characters with much more nuance and complexity, he said.

“The musical gives you more of the meat about what is happening, while the movie leaves you to make assumptions,” said Maurice. “You get more backstory as to why things had to happen the way they did.”

The only other time the Playhouse presented “Dreamgirls” was in 1989.

Interest was strong when auditions were announced for the upcoming production. More than 70 actors showed up, which made it clear to Maurice that the timing is right.

“I was nervous, but when I saw how excited the community was, it inspired me,” he said. “I thought ‘maybe this is what this community needs right now.’”

The cast includes some heavy hitters.

James Major Burns, who just closed a production of “Shrek” at a dinner-theater in Dayton, plays Jimmy “Thunder” Early.

Cleveland resident Sharleen Riley plays Effie, the lead singer of The Dreams, while Jennifer Zamis and Arielle Green play the other two members of the vocal group.

As Effie, Riley will sing the show-stopping number “And I’m Telling You I’m Not Going.” Maurice describes it as a “song of desperation” for Effie.

“She loses everything she ever had or loved ... her dream, her man, her best friend ... and she is acting out,” said Maurice. “It’s my job as director to make sure the audience feels that and sees that.”

He added that Riley “brings something relatable and loveable” to the role of Effie. “It will be memorable,” he said.

Jaron M. LaGrair and Curtis Tate are the music directors of “Dreamgirls.”