Teen builds Stations of the Cross for Eagle Scout project 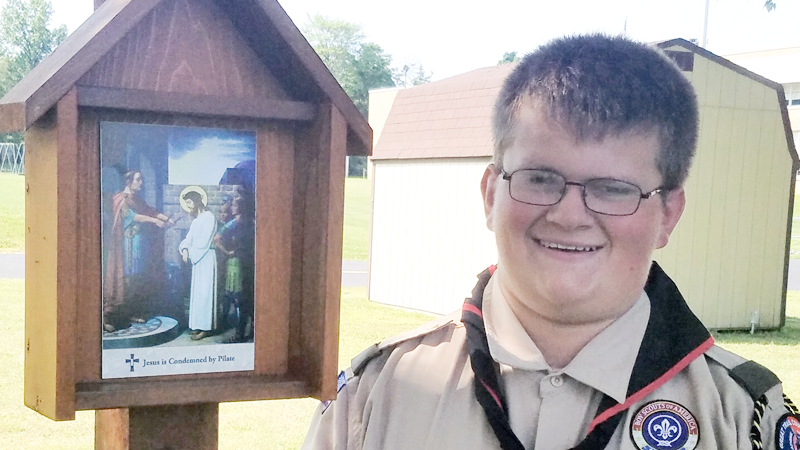 David Vuksanovich, 15, a Poland Seminary School student and a Troop 9002 Life Scout, built 14 outdoor Stations of the Cross for the Holy Family Church as part of his Eagle Scout project.

Eagle Scout is the highest rank attainable for Boy Scouts of America. Only 6.49 percent of eligible scouts earned the Eagle rank in 2018.

“I wanted to do something for my church,” Vuksanovich said.

He decided on the stations after brainstorming with Msgr. William Connell of the Holy Family Church.

Vuksanovich was responsible for planning the project from start to finish. He received donations from the church, school and school parent organizations along with family friends.

He and volunteers from Troop 9002 began assembling and staining the stations on June 1. They met again on June 8 to dig the holes and concrete the 14 posts into place behind the Emmaus House at the corner of the Holy Family property.

The project took about three weeks. The colored plaques, which depict different scenes from the Bible, had to be adhered to the wooden boxes which was delayed by the weather.

“When he sets his mind to something, he gets it done,” said his mother, Lori Vuksanovich. She said she is proud that he is on track to earn the Eagle Scout rank before turning the age of 16.

The stations will give a space for the parish, school and other ministries to pray and meditate during the Easter season.

“I’m glad it will help out people I know, and people I might not know,” he said.

Vuksanovich is an alumnus of Holy Family School and is active in the church and youth ministry.

The cedar wood needed for the project was from Baird Brothers while the Roman numerals were supplied by S&T Engraving. The plaques came from Nelson’s Catholic to the Max.