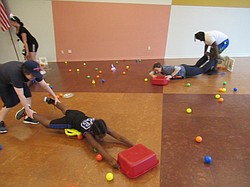 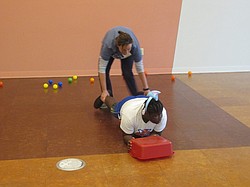 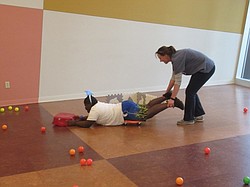 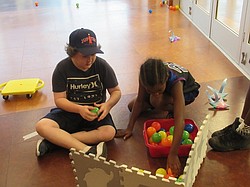 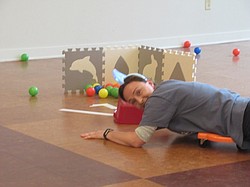 Neighbors | Jessica Harker .Librarian Allison Graf laid on a scooter to collect plastic balls to try to win the game Hungry Hungry Sharks at the Michael Kusalaba library on July 31.

In celebration of shark week the Michael Kusalaba library hosted a game of “Hungry Hungry Sharks” on July 31.

The game is based off the live version of “Hungry Hungry Hippos,” where children work in teams of two to collect the most plastic balls.

“It’s so much fun, and it’s a very active game,” said librarian Allison Graf who ran the event.

The game began by dumping a bag full of plastic balls in the middle of the room.

Then within two minutes teams would work to collect them using plastic tubs, with one person riding on their stomach on a scooter while the other steered using that persons feet.

“It’s the first time we have every played this, but I think it’s a great way to get anyone of any age involved,” Graf said.

She said she had only one rule to the game, don’t knock into other teams.

“It’s not bumper cars,” Graf said. “We need to make sure no one gets hurt.”

Teams played three rounds of the game, keeping store by counting all of the balls each team was able to collect in their corner by the end.

Graf also created extra points by marking certain plastic balls with a star, indicating they were worth five points.

This is the second time the library has done a shark week celebration, coinciding with the Discovery Channel’s annual event.