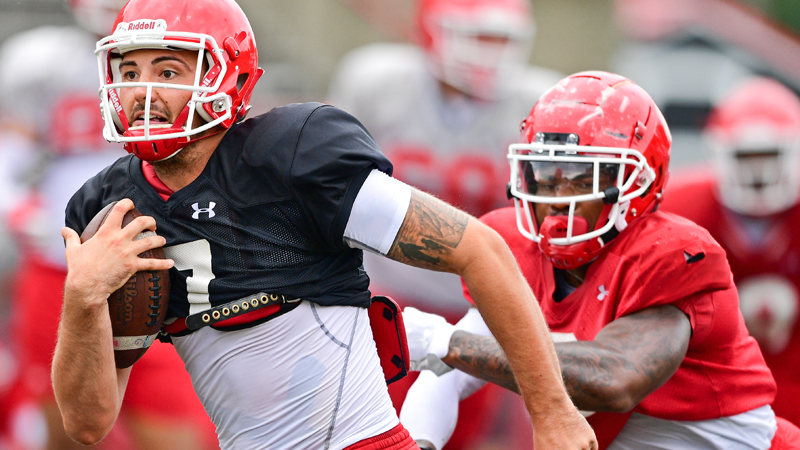 Nearly a month of practice, film study and conditioning is in the books. The wait is finally over.

Game week has arrived for the Youngstown State football team.

The season opener on Saturday against Samford in Montgomery, Ala., doesn’t just provide an opportunity for a win. It’s a shot at redemption.

The Penguins’ 23-21 loss to Butler in last year’s opener is still on the players’ minds. The loss to an eventual 4-7 team derailed the season.

YSU’s path to atonement starts on the national stage. The Penguins don’t play an FBS program this season, so the players view Samford as their key non-conference opponent.

“I would say that the gravity — the fact that it’s on TV [ESPN} — the first one is always the easiest to get a little extra juice for,” quarterback Nathan Mays said.

Other veterans are returning to help. Defensive end Justus Reed and safety Kyle Hegedus are back for the Penguins.

Both suffered season-ending injuries and missed the opener against Butler. Both will start on Saturday, aiding a defense that allowed nearly 200 passing yards per game last season.

“So we have something to prove, but we also have the confidence. We talk about it in our meeting room. We want the swagger, we want the discipline, we want to be violent, we wanna be relentless.”

Help in the passing game will be needed.

Samford has averaged 33.9 points per game since Chris Hatcher took over the program in 2015. The Bulldogs threw for an FCS-leading 392.7 yards per game last season. They also ranked sixth with 34 passing touchdowns.

However, quarterback Devlin Hodges, who started for four years at Samford, is currently on the Pittsburgh Steelers roster.

Liam Welch and Chris Oladokun have competed for the starting quarterback job. Oladokun played in six games — starting in three — for South Florida before transferring during the offseason.

“We’re not really worried about what they do, more so how we come out and how we play that day,” Reed said.

Mays and Joe Craycraft are listed as potential starters under center.

The duo has battled for the starting job throughout fall camp, but YSU head coach Bo Pelini said this week’s practice will dictate who gets on the field first.

Quarterback isn’t the only position still up in the air.

The depth chart had senior Myles Douglas and West Branch graduate Jacob Zinni both listed as the left guard.

Pelni said the team is still trying to figure out it’s offensive line combinations and the split starter is a product of interior O-line depth.

“They’re both playing well,” Pelini said. “They’re both doing some good things. I’m sure you’ll see ‘em both at some point.”

MCFADDEN Gets the Call

Poland graduate Colten McFadden will start at kicker. He transferred from Akron during the offseason.

Pelini said Grant Gonya has been dealing with a quad injury, but could be available if needed.