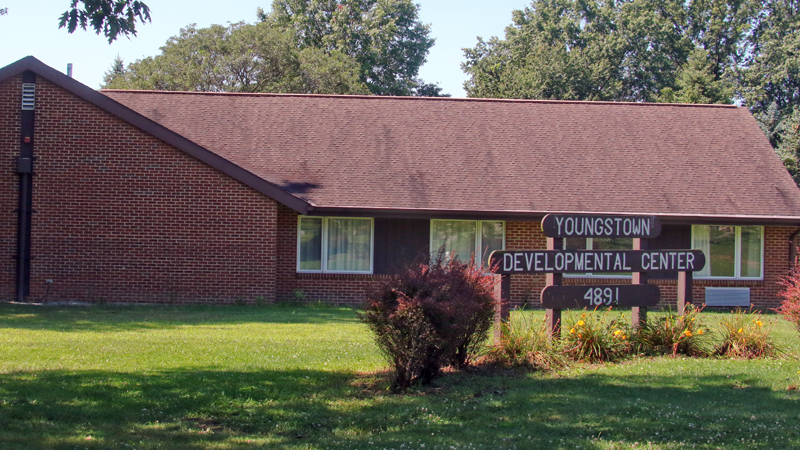 Photo by Robert K. Yosay | Shown here is one building on the 35-acre Youngstown Developmental Center campus along County Line Road in Mineral Ridge, which was shuttered in June 2017. Mahoning County officials on Monday unveiled plans to put partnering health providers in the facility and step up programming.

With the proposal comes a plea for $1.5 million in startup funds — which could possibly come from the state’s capital budget — to allow county Mental Health and Recovery Board partnering health agencies such as Alta Behavioral Healthcare, Meridian HealthCare, Compass Family and Community Services and Easter Seals to expand offices and programming for the under-served there.

Bill Whitacre, county Board of Developmental Disabilities superintendent, said providing respite care for local clients often means sending them to facilities in Cambridge, Columbus or Tiffin — a consequence of the state-run facility’s closure in June 2017.

“Now a family has to travel two-and-a-half, three hours to go visit their loved one,” he said.

He said the DD board is considering new respite services in some of the facility’s cottages, each possibly housing four beds serviced by a local provider.

Joe Caruso, Compass CEO, said the agency could move all its administrative offices to YDC and convert one of the larger residential buildings to an adult assisted living facility.

“We are out of space from a clinical standpoint for all of our services,” he said. “We know in our communinty we have a whole host of adults that have some significant needs and there really is no [local] growth for people with severe mental illness.”

Joe Shorokey, Alta CEO, said its Meridian Road facility has been “overpopulated’ for years and would move Head Start administration and seven classrooms as well as other behavioral programs to YDC’s central building if given the opportunity.

Like Alta, Meridian HealthCare has been forced into “Plan B’s” while waiting for the years-long plan to re-open YDC has been mulled, said Meridian CEO Larry Moliterno.

With a $500,000 state opioid-response grant in-hand, YDC would be home to a youth community center, said Sarah Lown, the authority’s finance director.

“When a kid comes in there, [they] can get mentorship, job skills training, social enterprise opportunities, spiritual counseling, recreation and so on,” she said. “It’s the first in our ongoing effort to make this operation up and running to the best-possible degree we can.”

Under the new proposal, the authority would assume ownership and manage the 35-acre campus along East County Line Road in Mineral Ridge, which once housed close to 90 developmentally disabled individuals and employed more than 250 people. County officials said they intend to later hand off administration to the tenant agencies, which will be overseen by an advisory board including county officials.

The county has until June 30, 2020, to find the $1.5 million to start the facility back up, before ownership reverts back to the state, said Duane Piccirilli, executive director of the county Mental Health and Recovery Board.

“We can’t allow this to just close,” he said Monday. “We want this to be something to go on for the future.”

Though State Rep. Don Manning, R-59th, who came from the mental health sector, called YDC’s rebirth a “worthwhile project” he said he doesn’t believe Ohio Gov. Mike DeWine would back the project if Mahoning County officials don’t seek public bids for a private property manager, a caveat of his own funding plan to re-open the center.

DeWine’s spokesman Dan Tierney said Monday though the office is aware of Manning’s funding plan, it didn’t have a stance on his or the county’s proposals and that “any operating concerns would be decided locally.”

County officials later told The Vindicator private management of YDC is not only cost-prohibitive but wouldn’t allow for county oversight into its administration. The center itself and all partnering agencies will be non-profits, which means less tax costs.

“There’s nothing untoward,” said county Prosecutor Paul Gains. “It’s a multi-agency endeavor to fill a void that was created when the state of Ohio shut this place down.”