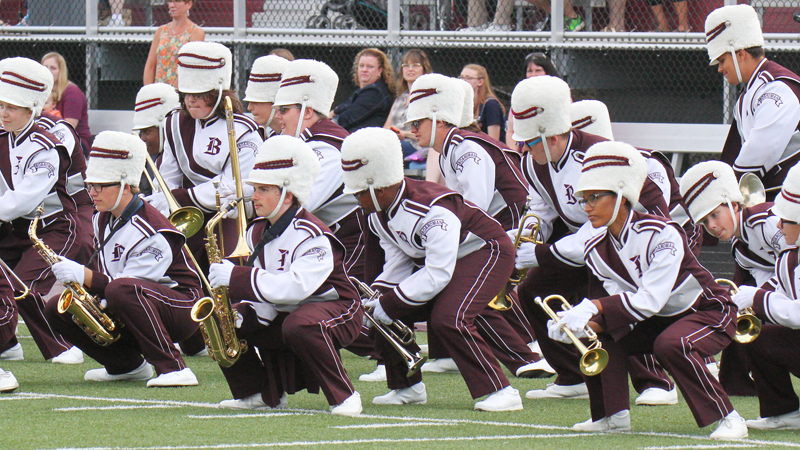 If any of the thousands of people attending Friday night’s band night were still denying it, the Friday night lights of Spartan Stadium must have convinced them that summer was truly fading to fall.

But the mid-August weather was so perfect as attendees listened to the Boardman, Austintown, Howland, Lowellville and McDonald marching bands, it would have been hard to feel sad.

“On our way in, we were like, it’s the first band night. It’s the end of summer. It seemed like it just started,” said Shawna Shaffer of Austintown, sitting with a crowd of a half-dozen, including her husband and mother-in-law.

Her husband, Ed, said having his daughter in Fitch High’s band gives him a good feeling, and not just because Austintown has a military band that recognizes service members like him.

“I think it’s such a good thing for them,” he said of performing in the band.

First Ed, then the people in his party stood for patriotic songs performed by the Fitch band — the first, a medley representing each branch of the military, and later, “The Stars and Stripes,” which brought a large number of people to their feet to clap in synch with the tune.

Ed’s mother, Cindy Phillips of Hubbard, said Austintown has had a military band since she was a Boardman High School student in the 1960s.

The gorgeous weather was made all the more amazing by the fact that Friday’s band night was only the second one of Boardman’s in the past five years not canceled by rain.

“This is a perfect night, and Boardman Band and [band Director] Tom Ruggieri and all of you guys deserve a night with weather like this,” Boardman High Principal Cindi Fernback told the crowd.

Boardman Superintendent Tim Saxton spoke of the value of music.

Fernback said she was a four-year veteran of high school marching band.

“Most of my best memories of high school are deeply intertwined with my band experience,” she said.

“I became more than just friends with my bandmates. I became family. I know these kids feel like family, and you parents up there, you spend so much time, I know you feel like family too,” she said, looking up from the field at the audience.

Jamison Diglaw and his wife, Christina, spotted their son, Dominic on the stadium field as they first walked up into the seating area.

“There he is,” Jamison said as he looked up and saw Dominic fulfilling his role as drum major, which involves being leader of the marching band during rehearsals and in performances.

Lynn Janis of Boardman was meeting another woman at the show but walked in from the parking area by herself.

She told a reporter she started attending Boardman band nights over 30 years ago and brought her daughters. “They were in elementary school at the time,” Janis said. “That made them want to be in the band. They are 47 and 49.”

Mikayla Basilon said she was drawn to the band show by her previous connection to the Howland High School Marching Band.

When asked what her thoughts were when thinking about coming to the show, she said, “It gives me the feeling that it is marching season, and I should be marching,’ said the 2018 Howland grad.