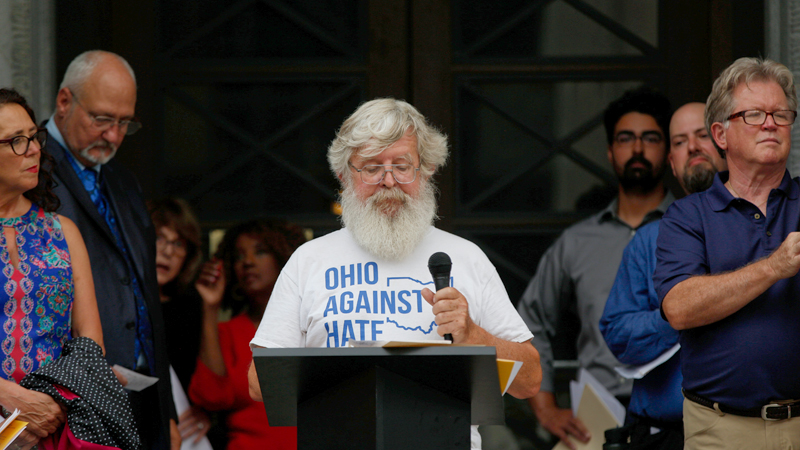 After the Feb. 14, 2018, mass shooting at Marjorie Stoneman Douglas High School in Parkland, Fla., Kira Walker organized a school walkout to show solidarity with those affected by the tragedy and demand that gun violence be addressed.

Nevertheless, since the tragedy that left 17 students and staff dead, too little has been done to tackle the problem, the 2019 Youngstown Early College graduate and Mahoning Valley Sojourn to the Past member contends.

“This is beyond ridiculous and unacceptable,” Walker told a crowd at a community prayer vigil Thursday evening on the Mahoning County Courthouse steps to remember and honor those killed in recent mass shootings in El Paso, Texas, Dayton and at a garlic festival in Gilroy, Calif. “It’s been two years since Parkland, and it feels like nothing’s changed.”

Sponsoring the somber 30-minute gathering was the Alliance for Congregational Transformation Influencing Our Neighborhoods.

Walker demanded an end to reflexively blaming mental illness for the scourge of gun violence in the U.S., as President Donald Trump has said. Most other countries have people with such challenges, yet don’t have nearly the number of mass shootings, said Walker, who also urged attendees to call out white supremacy and vote for stronger gun laws.

Calling America’s gun violence “a public health crisis that requires a public solution,” state Rep. Michele Lepore-Hagan of Youngstown, D-58th, demanded hearings on common-sense gun-safety bills and a ban on assault weapons, as well as universal background checks and support for red-flag laws. Such laws allow police or family members to petition a state court to order the temporary removal of firearms from those deemed dangerous to themselves or others.

A representative for U.S. Sen. Sherrod Brown, D-Cleveland, read aloud a letter from Brown that says in part, “The shooter in Dayton was armed with an AR-15 assault rifle with magazines containing 100 rounds – all purchased legally. There is no reason one man should have been able to kill nine innocent people … in less than a minute.”

The majority of mass shootings in the U.S. are motivated by white nationalist sentiment and the drumbeat of racist, hateful speech, such as the myth about an invasion of immigrants to this country from Central America, said Alex Montaz of the Ashtabula-based HOLA Ohio organization.

“I’m here to lift up and give hope to the people of Dayton, who have shouted, ‘Do something! Do something!’” said the Rev. Joseph Boyd, pastor of the Unitarian Universalist Church of Youngstown, referring to their rallying cry to demand that elected officials do more to address the problem.

“We are one people,” county Commissioner Carol Rimedio-Righetti said. “We have to speak with one voice.”