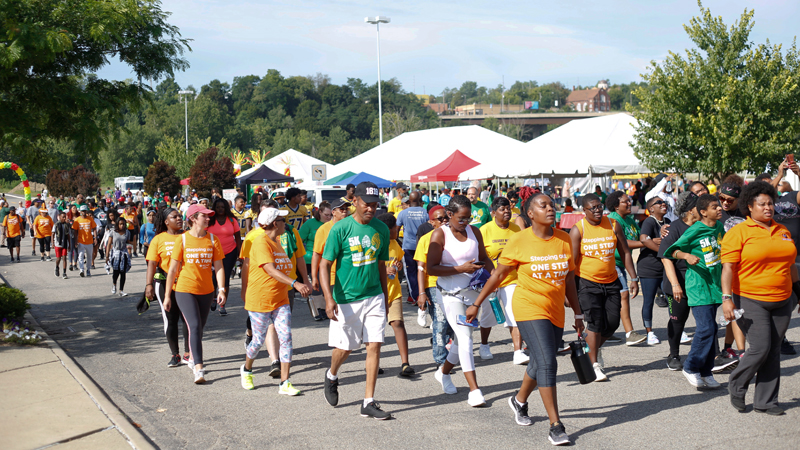 It’s not a stretch to see the connection between Darla Brown-Dunlap’s straightforward tips and staying in shape.

“Be proactive,” the Youngstown woman advised. “Walking is free, so put the [video] games down and turn off the TV. Just go outside.”

Brown-Dunlap is not shy about admitting she does plenty of walking. She also added more than 3 miles to it by taking part in Saturday’s seventh annual African American 5K Male Wellness Walk and Run, which began and ended at the Covelli Centre, downtown.

The morning gathering, themed “Healthy men make healthy families,” was to encourage people to undergo regular checkups as well as make practical changes in their diets and exercise regimens. In addition, the walk and run was one of a series of events that began Friday and continues today to commemorate the 400th anniversary of what many historians say was the arrival of the first Africans in 1619 in English North America.

Joining Brown-Dunlap and hundreds of runners and walkers of all ages and races was her nephew, Daundray Brown of Youngstown, who runs a youth basketball camp and works out six days a week.

“The older you get, the more you want to be active,” said Brown, who added that becoming better educated about one’s diet is a powerful step toward tackling the nation’s high obesity rate.

Neither fear nor cost should deter people from getting regular health screenings, because agencies and services are available to assist those who are low-income, said Brown, who had his blood pressure checked before the walk and learned that his numbers were normal.

The incidence of diabetes, hypertension and prostate cancer is about 10 times higher in black men than the national average, so it’s critical they get checked consistently and take advantage of community resources to stay healthy, noted the Rev. Lewis W. Macklin II, event coordinator.

“Folks must assume responsibility for their wellness and know their numbers,” said the Rev. Mr. Macklin, who’s also pastor of Holy Trinity Missionary Baptist Church. “You don’t have to go to a gym. Walk your dog. Engage in responsible behaviors and get tested.”

Mr. Macklin also shared the stories of two men who said the wellness walk may have saved their lives. They included Theodore A. Brown, who had been diagnosed with prostate cancer and is now free of symptoms.

After the walk and run, many people attended a festival on nearby East Federal Street that explored the history of dance from Africa to America.

Dayna Terrell, the social-action chairwoman for the Youngstown chapter of Delta Theta Sigma sorority, gave a lecture centered on Africa’s contributions of food, culture, religion and music to America.

Collaborating with her organization were the Harambee Youth Dancers, led by Katrina Simms.

“Dancing was a survival mechanism in the fields,” Terrell explained, adding that the first blacks landed in 1619 in Jamestown, Va., and that many were enslaved and forcibly taken to the New World via the Atlantic slave trade.

Throughout the history of blacks in America, music and dance have evolved to reflect the social climate, she noted.

For example, the Harlem Renaissance that peaked in the 1920s was a blossoming black cultural, music, dance and social explosion that coincided with the Great Migration, in which many blacks left the heavily segregated South for better opportunities in northern cities. That period was characterized by many tap and jazz dances, as well as the birth of the famous Cotton Club and Savoy Ballroom, both in Harlem, Terrell noted.

During the civil-rights movement in the 1950s and 1960s, the social climate shifted, so much of the music of popular R&B singer James Brown and others reflected a time of protest and social unrest, she said. Also, the art forms also were in line with the more recent Black Lives Matter movement and protests against police brutality and black-on-black crime, she continued.

“Dance connects with the social climate at the time. I hope people will learn their history, and celebrate and unite,” Terrell added. “We need peace and unity.”