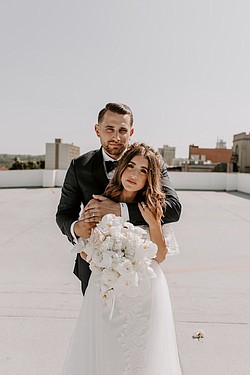 The Basilica of Our Lady of Mount Carmel in Youngstown provided the setting for the 2 p.m. July 13 wedding of Adrianna Ciotola and Michael Podolsky. Monsignor Michael Cariglio and Deacon Rob Joseph were the officiants.

The couple accepted congratulations during a reception at the Tippecanoe Country Club in Canfield.

The bride is a daughter of Atty. Robert Ascenzo and Joanne Ciotola of Canfield. Dr. David and Denise Podolsky of Canfield are the groom’s parents.

An off-the-shoulder gown with a nude tulle bodice accented by laser-cut floral applique flounce sleeves was worn by the bride. Her ensemble was completed with a double layer of white tulle overlay that created an A-line skirt.

The couple honeymooned in Anguilla and St. Barths.

Mrs. Podolsky earned a bachelor’s degree from Youngstown State University and a juris doctorate from the University of Akron School of Law. She is an attorney at Ciotola Law in Canfield.

Mr. Podolsky earned a bachelor’s degree from YSU, a juris doctorate from UA School of Law and a master’s degree in business administration from UA College of Business Administration. He is an attorney at Jones Day in Cleveland.