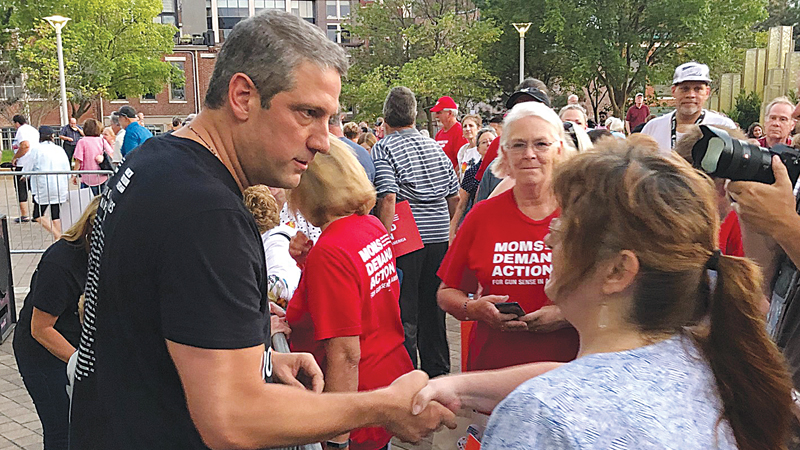 After stops in Akron, Columbus, and Cincinnati and the Oregon District of Dayton, the 30 to 40 Ohioans rolled into Louisville, Ky., and its Muhammad Ali Center’s amphitheater for the rally, which began at about 7:30 p.m. At some of the stops, groups of as many as 70 greeted the caravan, Ryan said.

Speaking after the rally, Ryan said an estimated 1,500 people were jammed into the venue.

“Poll say 93 percent of the people in the country favor the House-passed legislation for stronger background checks for gun purchasers,” he said.

“The rally energized me on a personal level. I feel like I’m doing something,” he added.

Ryan, a Democratic presidential candidate, said he wants Republicans and Democrats to work together to get the legislation passed.

McConnell told a Kentucky radio station that President Donald Trump called him Thursday morning and they talked about several ideas. The president, he said, is “anxious to get an outcome and so am I.”

Republicans have resisted expanding background checks, but face enormous pressure to do something in the aftermath of the double mass shootings over the weekend in El Paso, Texas, and Dayton that killed 31 people.

“Background checks and red flags will probably lead the discussion,” the Senate leader said, referring to legislation that allows authorities to seize firearms from someone deemed a threat to themselves or others.

McConnell, a Republican, has been under pressure to call senators back to Washington from their summer recess to work on gun measures. He rejected that idea, saying it would just lead to senators “scoring points and nothing would happen.”

Instead he wants to spend the August recess talking with Democratic and Republican senators to see what’s possible.

“What we can’t do is fail to pass something,” he said.

Ryan said the Caravan For Change and rally were designed “to keep the pressure” on McConnell, who has refused to move on bills approved by the House to require universal background checks on the sale of all firearms.

“We’ve got to keep the heat on,” he said. “Things are starting to progress and we need for that to continue.”

The idea for the rally, Ryan said, came during discussions with people earlier this week in Dayton, where a gunman killed nine people early Sunday.

More than 200 mayors, including two anguished by the mass shootings in Texas and Ohio, are urging the Senate to return to the Capitol to act on gun safety legislation amid criticism that Congress is failing to respond to the back-to-back attacks.

In a letter Thursday to McConnell and Democratic leader Chuck Schumer, the mayors wrote, “Our nation can no longer wait for our federal government to take the actions necessary to prevent people who should not have access to firearms from being able to purchase them.”

The mayors urged the Senate to vote on two House-passed bills expanding background checks for gun sales that passed that chamber earlier this year. It was signed by El Paso, Texas, Mayor Dee Margo, Dayton Mayor Nan Whaley and other mayor of towns where mass shootings have occurred, including Orlando and Parkland, Fla., Pittsburgh and Annapolis, Md.

“There is no worse thing that can happen to a city,” Whaley said of the weekend shooting in her city where nine people died. “We cannot allow this tragic event to fade from our memories without taking action. Politics has stood in the way of action for too long, and I can tell you politics seems very petty when it is your friends and neighbors who are injured or dead.”