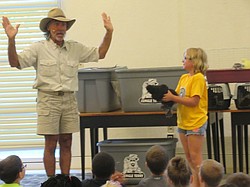 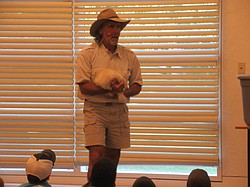 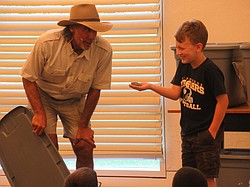 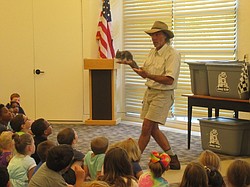 Neighbors | Jessica Harker.Performer Jungle Terry brought a chinchilla to the Austintown library July 10 for his show.

More than 75 children attended the event with their family.

“We are all friends and we are here to learn about some pretty fantastic animals,” Terry said.

Terry brought a number of exotic animals to the library for children to see.

During the show, he would bring the animals out and tell the community members gathered facts about the animals.

“I love doing library programs because if anyone one wants to learn more about the animals I bring, they can just get a book before they leave,” Terry said.

He began the program by bringing out a chinchilla.

For a number of the animals he brought volunteers from the audience up on stage to hold the animals.

Jungle Terry also allowed everyone who wanted to pet a turtle and a snake.

“It’s all about sparking interest in wildlife,” he said.

Jungle Terry’s Traveling Zoo is based out of Cleveland.

Librarian Cindy Mawhinney said that he has performed at the library before, but he hasn’t been back for a number of years.