Fourth of July themed craft at the MK library 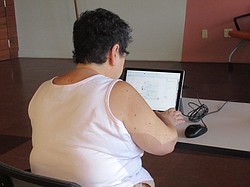 Neighbors | Jessica Harker .Community members worked on tablets to design their fourth of july themed patterns during the Fourth of July Engraved Glass event at the Michael Kusalaba library July 1. 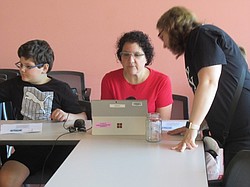 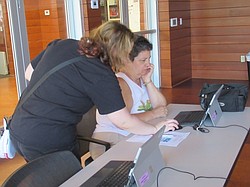 “We have hosted engraving glasses before, but this one is specific for the holiday,” Schneider said.

Kicking off the event community members worked on tablets to choose the design they wanted on their glass.

Schneider said that she picked out a number of designs to fit the theme that community members could chose from.

“It’s not a requirement though, anyone can do any design that they want,” Schneider said.

After choosing the design, Schneider used the laser engraver to etch the designs onto the mugs.