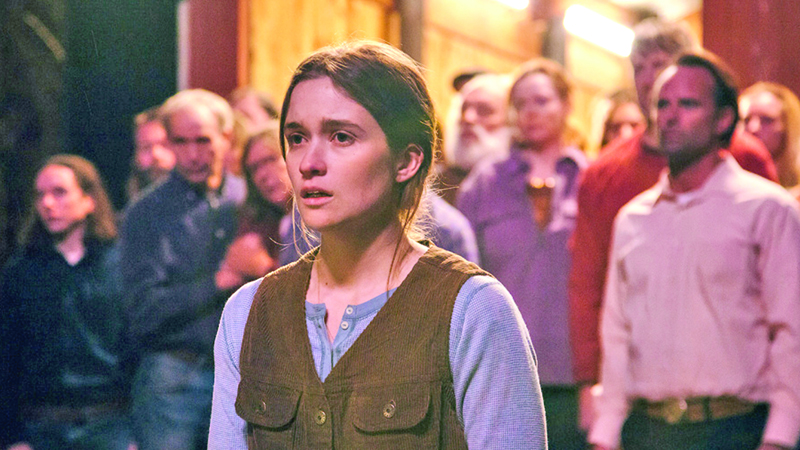 The cast of “Them That Follow” seems a lot more impressive today than it did in 2017, when it was being shot in rural areas near Lisbon and Salem.

And starting Friday, Mahoning Valley audiences can get their first look at the film. “Follow” opens in theaters nationwide that day, including Cinema South in Boardman.

While the modest-budget film has drawn mixed reviews – it drew a critics’ score of 63 percent on rottentomatoes.com – it earned high praise from some influential sources.

Los Angeles Times film critic Kenneth Turan called it “an ambitious and impressive independent production, where the creation of mood and place is so convincing it enables us to buy into a richly melodramatic plot about a taboo romance.”

“Follow” premiered earlier this year at the Sundance Film Festival and also was screened at the Cleveland International Film Festival.

It tells the story of a pastor’s daughter who is promised to marry a young man in their faith. Conflict arises when her relationship with a nonbeliever comes to light.

“Follow” offers a glimpse into the rarely seen world of those who handle poisonous snakes to demonstrate their faith in God.

But while its subject matter is unusual, the cast is the film’s most stunning aspect. It features several actors whose stars have risen sharply in the past year, giving “Follow” a higher profile as well.

Olivia Colman, the British actress who won an Oscar Award this year for her portrayal of Queen Anne in “The Favourite.”

Walton Goggins, who will star in the upcoming CBS sitcom “The Unicorn. His many film and TV credits already include “Maze Runner,” “Tomb Raider,” “The Hateful Eight” and TV’s “Justified.”

Lewis Pullman, who will star in the film “Top Gun: Maverick,” which opens next year.

Alice Englert, best known for her starring role in the 2013 film “Ginger and Rosa.”

Not bad for a movie made for less than $3 million.

The magnitude of the cast might not have been fully appreciated by cinema fans during the production phase.

But Bradley Gallo, one of the producers of “Them That Follow,” said he could tell from the start that the talent was impressive.

“The producers knew they were all great actors and were going to blow up,” he said in a recent phone interview. “But you still have to make great work. This is an amazing moment for all of us.”

After the theatrical run ends, Gallo expects the film to have a long afterlife on other platforms, including cable and then broadcast television.

“It is a film with incredible actors, but made when some were just starting out,” he said. “It will be looked back upon that way.”

The film is an overchiever, said Gallo, who heaped praise on the directors, cast and crew.

“I am beyond proud of it, especially with our budget,” he said. “We had an ensemble cast of seven working in the middle of nowhere, with the crew coming in from Pittsburgh and Cleveland. To make this happen, for an original screenplay, with no [special effects technology], and it’s not even a true story... to get it into Sundance, and then get it into theatrical release... it is a miracle.”

Gallo also had good things to say about working in the Mahoning Valley.

“I loved Ohio,” he said. “I felt that everybody and every thing was a pleasant experience. There were a few bumps in the road but the area was supportive of filmmaking.”

The movie was partially funded by a $1.2 million float loan from the city of Youngstown – the first film to use the economic-development tool.

While it goes inside the insular and intense world of the religious community, it does not pass judgment on its adherents.

“We did a bird’s-eye view, but not to judge – and that was the point,” said Gallo. “Anybody who watches it and [sees a sociopoltical agenda]... that is in their own mind. That was not the plan of the filmmakers. We didn’t set out to make a point.”

In an interview with entertainment website Collider, co-director Poulton said one of their goals was to tell the story in way that is unbiased and as sympathetic as possible.

“Dan and I are not people of faith,” said Poulton, referring to co-director Savage. “That is why we were so deeply curious about exploring a religious community and people who practice a really radical tradition. We wanted to understand people of faith... the certainty they must have. Each time lay their head down on their pillow at night, they know the answers, and that is something Dan and I do not share.”

“It’s easy to make fun of these folks, to not take them seriously, and we really wanted to take their everyday lives seriously, and the extraordinary stakes they take in practicing their religion,” he said. “You are following along with characters whose choices you yourself might not make, but I think by the film’s end, you come to understand why they make those choices.”

Gallo, the producer, said he can see “Follow” garnering accolades during awards season.

“Goggins will probably be in the awards discussion,” he said. “Olivia [Colman] going from playing the Queen of England [in ‘The Favourite’] to a mother in a snake-handling community, will too. She also happens to be one of the sweetest, kindest persons on earth and extremely funny. I think she is going to be a legend, on a level with Meryl Streep.”

Gallo said the film must first catch the eye of organizations that focus on lower-profile films, such as the Independent Spirit Awards.

“A small movie like this one will need to first gain recognition from the indie community, and then pick up steam,” he said.

There will not be a private Valley screening for regional officials, crew and actors who were involved in the film, said Gallo.

Only four Valley residents had parts as extras in the film: Ashley Marie Lewis and her brother, Chris Lewis, both of Austintown; Roger Petan of Salem; and the late Jay Nagy of Howland.

Ashley said recently that she had not yet seen “Follow,” and is looking forward to its opening in movie theaters.

Working with the filmmakers and cast was a memorable experience for her.

“The directors and cast truly put their hearts and souls into this project, and it was absolutely incredible to be a part of it,” she said.

“We spent a week filming with the entire main cast, and they made us feel like family. Their performances were powerful, and while I’ve only seen bits and pieces of the final production, I have no doubt that everyone who sees it will walk out in awe.”