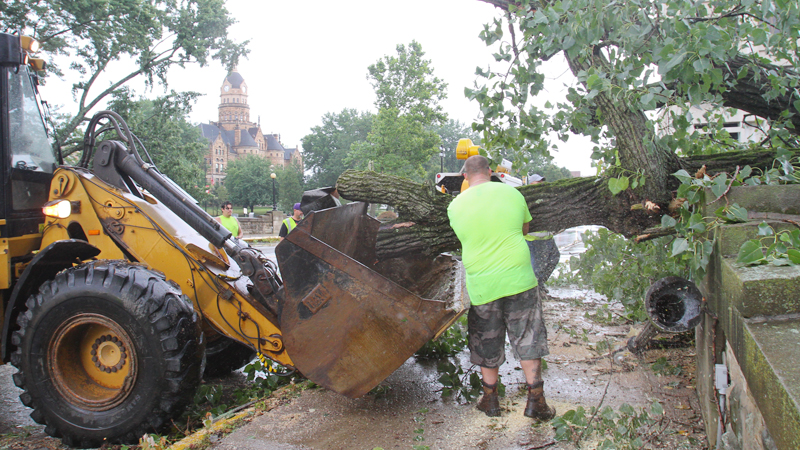 “Everybody was trying to hold the tent down,” said Randall Rickard of Niles, owner of Pasquale’s.

Rickard and his wife, Susan, and daughter, Rachael, and their employees successfully held the tent in place, but it still sustained significant damage.

“It was a little shocking to see this kind of weather at this time of year,” Rickard said.

Eric Wilhelm, meteorologist for 21 WFMJ-TV, The Vindicator’s broadcast partner, estimated wind gusts of 50 to 60 miles per hour when it hit the downtown area around 2:30 p.m., knocking down trees and cutting off power for a period of time. Doppler radar estimated rainfall of 1⁄2-1 inch of rain in Warren and upwards of 2 inches in the Howland and Vienna areas.

Unfortunately, Thursday’s opening day of popular festival may see some of the same type of weather.

If the storm had struck Thursday afternoon, there would have been hundreds, if not thousands, of people on Courthouse Square who could have been in harm’s way from falling trees, tree branches and blowing debris.

On Tuesday, several tents were severely damaged, and even a portable toilet was upended.

City crews worked to clean up several large fallen and damaged trees in Courthouse Park and a very large tree that ended up leaning against the south side of the Mahoning Avenue Bridge next to the Reeves Apartments.

Thomas Kosan of Warren was behind the Warren Hot Dog Shoppe at the corner of West Market and Tod Avenue Northwest when the storm came through.

“People were running for their lives,” Kosan said.

“This is as bad as I’ve seen it, weatherwise, coming up on festival week,” said Lee DeJacimo of Warren, a long-time member of the festival committee who ran the boccie tournament for many years.

Surveying the damage in Courthouse Park, DeJacimo praised the power company and city operations crews for doing “a great job” cleaning up the damage.

The storm also left several downtown streets flooded with up to 6 or 8 inches of rain water, particularly along East Market from Trumbull Memorial Regional Hospital through the downtown area past Park Avenue.

And though the festival’s opening day may see some of the same type of severe weather, Wilhelm said the good news is, the forecast calls for fantastic weather Friday and over the weekend.