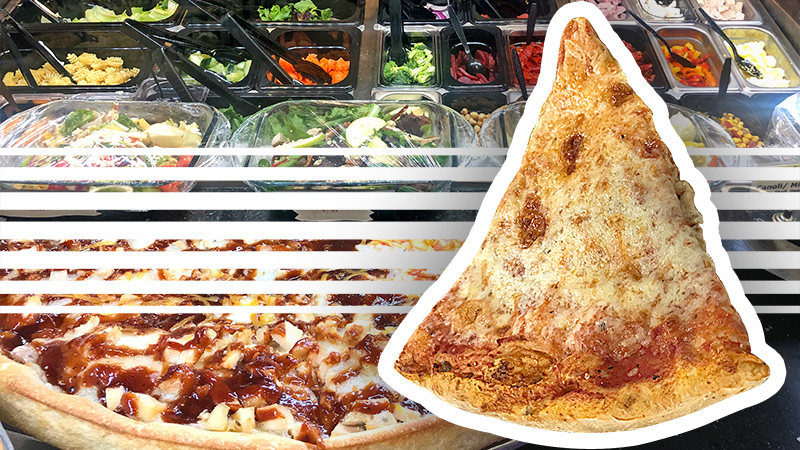 Salvatore’s Pizzeria at the Eastwood Mall New York-style pizza, specialty salads along with its build-your-own salad and wrap bar, all with the great Salvatore’s flavor.

An interview with Biljana D'Avanzo, manager at Salvatore's Pizzeria. This video feature is from Valley Deals 365, a partnership between The Vindicator and 21 WFMJ-TV. Visit Valleydeals365.com to view this and other deals.

1/2 OFF VOUCHER FOR MARK’S LANDING.

1/2 OFF VOUCHER FOR THE SHALE TAVERN.

NILES – The New York style of pizza – the thin, floppy, foldable crust — is not native to Youngstown like the Brier Hill. But Salvatore’s Pizzeria gives that style pizza its own place in the Mahoning Valley.

“I’ve had pizza elsewhere, and our New York style is phenomenal,” Salvatore’s manager Biljana D’Avanzo said. “There is a definite style to Salvatore’s versus other pizza shops, and I think (owner Salvatore Coppola) has done a very good job throughout the years.”

The Eastwood Mall Salvatore’s offers daily lunch specials to shoppers, and D’Avanzo notes they and mall employees welcome new and revolving specials throughout the week. The menu rotates different cold items like wraps, sandwiches and salads, as well as hot items like pepperoni rolls, calzones and strombolis.

Also added recently to the Eastwood location is an expanded salad menu with six specialty salads, and the option to build-your-own salad or wrap.

“The combo meals, a lot of people will do two slices and a small soft drink with it,” she said. “For $7.99, a great deal, especially if you get our deep-dish pizza. You can get a chicken, bacon, ranch or anything like that, you’re getting quite a deal, because it’s $4.69 a slice.”

As one might expect, the holiday season is where Salvatore’s ticks up its pizza production. The Eastwood Mall’s Black Friday shoppers can take a rest from the madness and grab a slice.

“It’s a madhouse in here,” D’Avanzo said. “We’re here all night long. Crazy, crazy hours. They can order pizza to go, and pick it up on the way out, too.”

While Salvatore’s has three Valley locations, multiple locations, however, does not mean three different tastes.

The years – since 1975 – have developed Salvatore’s into a triangulated mini-franchise. Their location in the Eastwood Mall’s food court, in addition to two Salvatore’s Italian Grill in Austintown and Howland, gives the valley an opportunity to sample the same taste with a different experience.

The Austintown and Howland locations offer a full-service bar along with an extended menu. The Eastwood Mall location is a quicker stop for a slice or two, for a salad, sandwich, or a specialty creation.

“Sal had a passion to grow,” D’Avanzo said. “He didn’t just want to stay with pizza, and luckily the restaurant is quite successful. It’s gone through a lot of transitions, where it started as just a small bar with four stools, and now it’s become a banquet room, restaurant, [and] patio.”

At the restaurant locations, a full dinner menu extends to pasta creations, seafood, chicken and veal dishes, and burger options.

Salvatore’s Pizzeria at Eastwood Mall is open daily at 11 a.m.

For more information on Salvatore’s Pizzeria or their other locations, including menus and catering information, visit mysalvatores.com.

Note: The vouchers are good for Salvatore’s Eastwood location only.