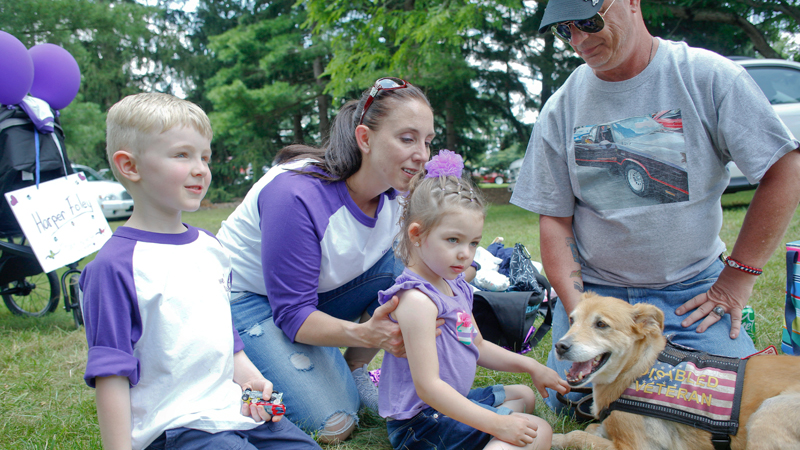 Jade Foley expressed her gratitude for the generosity of those who took part in a longtime car show.

“This is wonderful and amazing; the communities are amazing,” the Cortland woman said, referring to those who came to the 41st annual Antique, Classic & Special Interest Cars in the Park show and flea market Sunday in Boardman Park.

Proceeds are to help defray the medical costs for Jade’s 4-year-old daughter, Harper Foley, who was diagnosed with a type of epilepsy called Dravet syndrome, a rare and severe condition that usually manifests itself in the first year of life and is characterized in part by prolonged and/or recurring seizures.

“She won’t outgrow it; it’s a lifelong thing. She can’t regulate her body temperature, because of that mutation,” Jade explained, referring to a gene called SCN1A.

As a result, Harper is on a cocktail of five medications, the combination and dosages of which sometimes have to be tweaked or modified to work best for the symptoms she’s dealing with that can change. The girl has about 1,000 small seizures daily, Jade estimated, some of which are evident when she inexplicably pauses while speaking or falls when walking.

In addition to medication, her daughter receives speech, physical and occupational therapy, said Jade, who came to the car show also with her son, Emmett, 6; father, Jim Grove; and a host of family members, friends and supporters who made up “Team Harper.”

At one point, Harper seemed oblivious to the throngs of car enthusiasts, instead content to get acquainted with Gracie, a 9-year-old service dog accompanied by a veteran who suffers from post-traumatic stress disorder and who made a monetary donation to help the little girl.

Doing their part to help attendees better appreciate the value of vintage vehicles were Clyde Foor and his daughter, Jessica Foor, both of Poland. Jessica owns a deep-maroon, two-door 1940 Ford Deluxe with a flathead engine and transmission, and was happy to have her dog, Piper, on hand.

“The car was in Arizona, and a guy bought it in Niles, and I bought it off him,” Clyde said, adding it is completely original and has more than 100,000 miles.

The 79-year-old vehicle, which also has an AM radio, a clock panel and naugahyde-leather seats, is kept in a heated garage during the winter, he continued.

A sample of other cars spread out through much of the park included a red 1949 four-door Chrysler Highlander with a 6-cylinder fluid-drive engine, a scarlett-red 1948 Ford F-1 pickup truck, a 1941 Plymouth Coupe with its original engine and a $9,500 asking price, two 1932 model coupes next to each other and a red 1957 Plymouth Belvedere convertible owned by Richard Wilk of Lisbon.

“I bought it restored about five years ago. It came out in Quebec, Canada,” recalled Wilk, who, along with his partner, Bill Riggle, owns Timeless Classics, an Akron-based business that specializes in working on chassis and restoring classic cars.

An initial challenge was dealing with the paperwork, which was written in French; though with a friend’s help, he was able to get an American title for the car, Wilk explained.

Next to the Belvedere was another pride and joy for Wilk: his shell-pink 1956 DeSoto model that he bought as is last November in Cleveland.

Providing much of the entertainment was longtime broadcaster and disc jockey Thomas John, as well as Common Ground, a band that played plenty of oldies and blues music.

In addition, the event was in memory of Peter J. Draia, a Mahoning Valley Olde Car Club charter member who died May 6 at age 97.

Also, first- and second-place trophies were awarded in more than 20 categories.