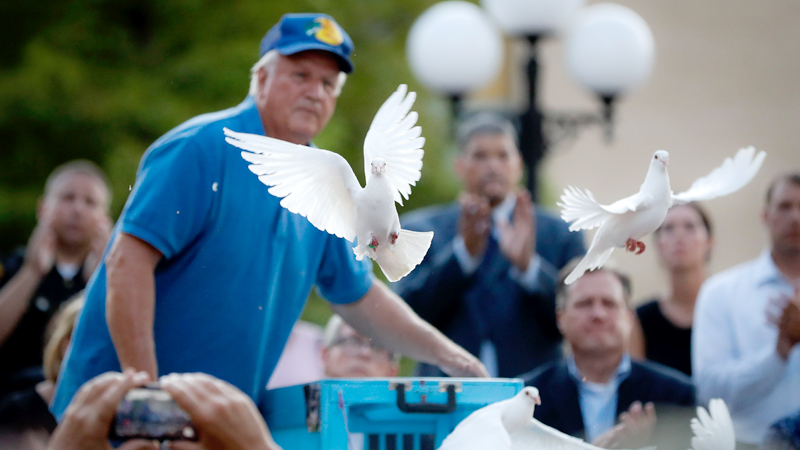 Rep. Tim Ryan is calling on Congress to “immediately end its August recess and reconvene in Washington to take up a package of legislation meant to stop these acts of horror and other acts of gun violence that affect every single American.”

Ryan, D-13th of Howland and U.S. Sen. Sherrod Brown, D-Cleveland issued statements calling for stricter gun control after mass shootings in El Paso, Texas, on Saturday in which 20 were killed, and in Dayton in which nine were were killed about 1 a.m Sunday.

Brown said he is “filled with sadness for the victims and their families and gratitude for the police officers who responded to the scene and medical professionals who cared for the injured in Dayton.”

Also, Brown said he is “angry that, after shooting after shooting, politicians in Washington, D.C., and Columbus refuse to pass sensible gun-safety laws to protect our communities.”

“Mass shootings in America have become the norm. The Dayton, El Paso and Gilroy, Calif., communities are reeling, and we are responsible,” said Ryan.

Ryan also said he is suspending his campaign for president to return to Ohio.

“We can’t continue to offer up the same condolences again and again with no action to protect our communities. These acts affect every American family, our children are taught to shelter in place in our schools, our public spaces feel suffocating with escalating security barriers and feelings of unease,” said Ryan.

“As Ohio woke up Sunday morning to the news of this horrific attack, we were still learning about the attack in Dayton and we don’t know exactly what, if anything, could have prevented this specific tragedy. But we know thoughts and prayers are not enough; we have a responsibility to act,” said Brown.

“My office stands ready to assist the Dayton community with whatever is needed to investigate and recover from this attack,” Brown said.

Speaking at a press conference in Dayton on Sunday afternoon, U.S. Sen. Rob Portman, R-Cincinnati, described the mass shootings in that city as “shocking, unspeakable, tragic.”

Portman praised the city for its resilience and how it comes together and responds to help victims and families of those struck down. He urged people to support the Oregon District Tragedy Fund being run through the Dayton Community Foundation to help victims

Portman praised the bravery of Dayton police who, he said “in the face of danger, ran straight into it. This courage was extraordinary and saved lives, probably hundreds of lives, given the situation.”

“My colleague Senator Brown has talked about legislation. We should also, of course, as we figure out what happened here, learn lessons from it, just as we need to learn lessons from others. I’m sure more could be done,” Portman said.

But, said Portman, “there is something deeper going on here.”

“If you look at the suicide rates and addiction rates this community ... and the mental health crisis in our country, there aren’t enough laws, and in fact no law, to correct some of the more fundamental cultural problems we face today as a country.”

“I look forward to working together with my colleagues to try to respond in the most effective way possible, but we also have to look deep into our hearts and figure out how can someone point a gun at someone whom he had never seen or known and pull the trigger,” Portman concluded.

Ohio Gov. Mike DeWine said: “Fran and I are absolutely heartbroken over the horrible attack that occurred Sunday morning in Dayton. We join those across Ohio and this country in offering our prayers to victims and their families,” he said.

“I have spoken with Dayton Mayor Nan Whaley and offered any assistance on behalf of the state. I have been briefed by the Ohio Department of Public Safety, and the Ohio State Highway Patrol has offered assistance to local law enforcement as they investigate this heinous act. I commend Dayton police and other first responders for their bravery and quick response to save lives and bring an end to this tragedy,” the governor said.

“I have ordered that flags in Ohio remain at half-mast in honor and memory of the victims who lost their lives Sunday morning,” DeWine said. The flags should remain lowered till sunset Thursday.

Ohio Attorney General Dave Yost said Sunday that it was a “day of sorrow and grief,” and that he is praying for the victims and their families.

“I am grateful for the first responders who acted swiftly to de-escalate the situation – they are true heroes, Yost said.