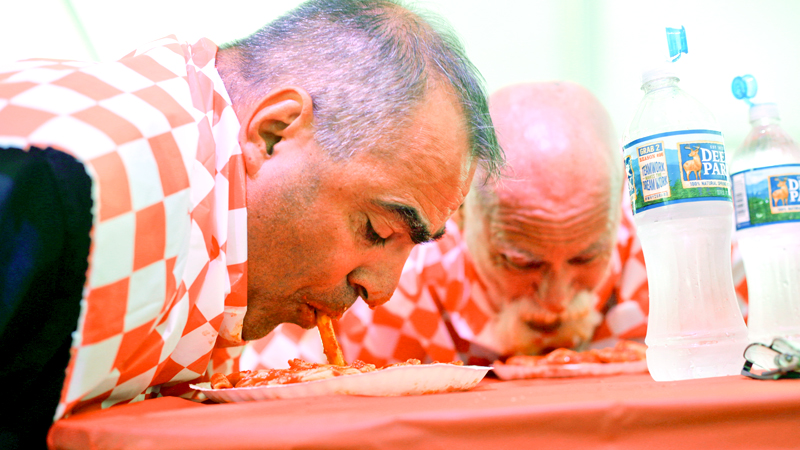 Duke Girardi’s only task for becoming $50 richer was to pasta time away - and quickly.

“I’ve done this for 19 years now and this is my seventh consecutive win,” Girardi said with glee, referring to the latest mark on his unblemished record of first-place finishes as a pasta-eating contestant.

The Boardman man owns Girardi’s Kitchen Express, a business that specializes in selling strombolis. Nevertheless, he didn’t have room for his specialty, because he was the top finisher among five contestants who took part in the fast-paced, lively competition Saturday afternoon that was part of the 34th annual Greater Youngstown Italian Fest.

Coming in a close second was Frank Anthony Davidio of Hubbard. For their first- and second-place finishes, Girardi and Davidio received $50 gift cards for Leo’s Ristorante of Howland.

The ethnic funfest continues from 11 a.m. to 11 p.m. today on and near Central Square, downtown.

The three-day event, which kicked off Friday, features plenty of entertainment, along with more than 40 food vendors and Italian restaurants as well as more than 24 retail vendors, organizers said.

The five contestants were challenged to eat one paper plate each of cavatelli, topped lightly with parmesan cheese, with their hands behind their backs and without silverware, explained Mary D’Amato, organizer. Leo’s Ristorante donated the food, she added.

“My girlfriend was talking to me about it all week, and I’m finally like, ‘I’ll do it,’” said Davidio, who works for a Pittsburgh-based steamfitters union and who finished his plate in slightly more than 2 minutes.

The other three competitors were Jay Goodman of Salem, Alec Hammond of Canfield and Patrick Mohorcic of Cleveland.

Those who wish to consume a little more about the region’s early history can buy a book released last month titled “Coal War in the Mahoning Valley: The Origin of Greater Youngstown’s Italians,” by Ben Lariccia and Joe Tucciarone.

The book examines, in part the struggles between coal miners and owners that culminated in a strike Jan. 1, 1873, after the demand for coal had decreased and owners sought to destroy the workers’ union. In April 1872, miners struck before being granted 20-cent raises, Lariccia noted.

“Iron and coal went hand in hand” in the Valley’s early industrial days, he said, adding that black miners brought to the area from Virginia were given two-month contracts to fill the void the strikers had left, but were unaware they were being used as strikebreakers.

Around the same time, a flood of Italians, many of them destitute, entered the U.S. via the Castle Garden immigration station in New York City, which predated Ellis Island, Tucciarone noted.

After the black miners’ contract expired, 105 Italians were contracted to come to the area March 19, 1873, from Castle Garden before working in a mine in Coalburg, an area in Hubbard Township. Consequently, they became the first known Italians to settle in the Valley, he continued.

“The coal industry put Youngstown on the map,” said Tucciarone, who noted that many of the immigrants were met with resentment and violence.

Far from being resentful, many attendees of the Italian fest enjoyed a bit of camaraderie with one another as they sat under two canopies on West Federal Street to hear the Jack Vasko Band, a quartet that plays a variety of polka tunes, including “Sweet Polka Dot” and “I Love an Old-Fashioned Polka.” A brief power glitch prevented the band from completing its rendition of the well-known jazz standard “Fly Me to the Moon,” popularized by Frank Sinatra, the Count Basie Orchestra and others, though the four finished the tune later in their two-hour set.

The Italian Fest’s 2019 Man of the Year is Frank Corso, a 1956 East High School graduate who owned Action Plumbing in Youngstown. The 2019 Woman of the Year is Mary Sara Mazzocca, a member of Infant Jesus of Prague Byzantine Catholic Church and whose son, Joseph Mazzocca Jr., hosts an Italian program on WKTL-FM 90.7.