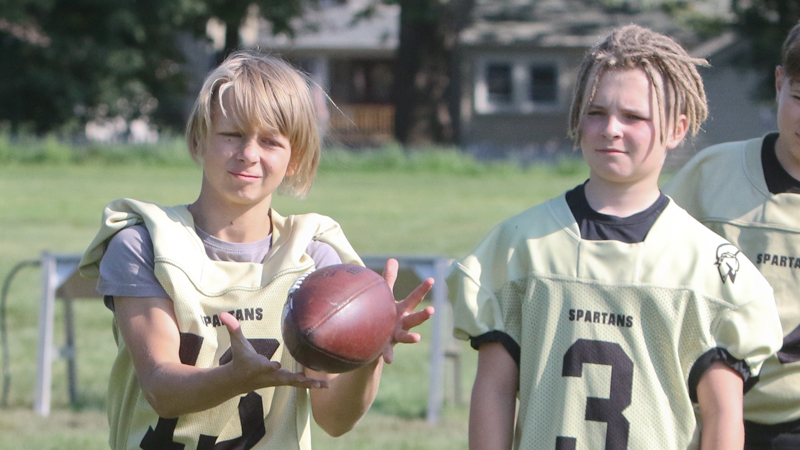 Keary Iarussi plays football in Moscow. That’s not his job, or at least it’s not what pays the bills. The 26 year-old Struthers native – and former Wildcat offensive lineman – spends his days translating investment research for his Russian colleagues.

After work, though, his skill at making English comprehensible to Russians, paired with his love of football, has made him one of the only American football coaches in Russia.

At first, Iarussi played and coached a men’s amateur team, the Moscow Spartans. The game was slower and the skill level amateur, but it was football, and it allowed Iarussi to stick with a game he loved.

Then, the children of his players started showing interest in the foreign sport their fathers played, and before long Iarussi found himself working with a small team of coaches to put together one of Russia’s only youth football teams.

Now, thanks in part to the donations of businesses and individuals, 10 of the 33 members of the Moscow Spartans youth team are spending two weeks studying American football in Struthers with Iarussi.

“There are very few kids’ teams in Russia, maybe one or two others. One of the other coaches wanted to start what was effectively a feeder team for our men’s teams, so we started advertising for a youth football team and that’s how it started,” Iarussi said.

“We originally wanted to bring them to the States for a football clinic, but most of them only last a few days, and the cost of the plane tickets and of getting visas wasn’t worth it just to bring them here for a couple of days. We wanted to make it worth their time.”

Friday afternoon, the boys munched on tortilla chips and splashed around in a swimming pool of one of Iarussi’s neighbors.

It was their second pool party since they arrived in late July. There seemed to be no lack of neighbors willing to open their homes to the young visitors.

Tim Tyapaev, 13, is the son of one of the adult Moscow Spartans who plays alongside Keary and his Russian coach, Vanya Goloveshkin. He was drying off next to the pool while he described why he got into the game.

“I want to be as good as my father someday,” Tyapaev said. “I like watching him play and playing catch with him. I hope to get better during the trip, but I’m also looking forward to having fun with my teammates.”

Before becoming a football player, Tyapaev’s sport of choice was skiing. Many of the boys came from other athletic backgrounds, with soccer and hockey the most popular among Russians.

His teammate, Saava Rogal, 10, was on track to become a rugby player like his grandfather, but then a movie about American football changed his mind.

“I started watching American football on YouTube and told my mom I wanted to play that,” Rogal said. “She was scared at first, but she eventually agreed to let me play.”

Earlier on Friday, the boys – ranging from age 10 to 15 – geared up in football helmets and spent time watching Struthers High School’s varsity team practice at the school field house.

The day before, the boys worked out with the Struthers Middle School team under the leadership of coach and city police Chief Tim Roddy. Several Russian players are staying with Roddy during the trip.

“I coached Keary when he was in middle school, and he and my son have been friends for years. So when I heard he was looking for a place to house a few of the players, it made perfect sense to have them stay with us. They’re middle-school football players, and I coach middle-school football players,” Roddy said. “It’s been an amazing experience, not just for the visiting players but for my players as well. They were all for the visit.”

Roddy isn’t the only coach involved in the trip. High school head coach Curt Kuntz also plans to spend some time with the boys.

“Keary’s dad is one of my best friends, and I coached his brother. When he went to Russia and started coaching semi-pro, Keary would reach out to me and bounce ideas off of me coach to coach,” Kuntz said. “He’s passionate about growing the game and getting the boys exposed to how American football works.”

Kuntz said Iarussi was passionate about trying to grow the game in Russia, but pointed out that growing any sport – especially football – takes time.

“Right now in Russia, football is like the fourth or fifth most popular sport. It’s a novelty there. You can’t really play football as a novelty. It’s an all-in kind of sport, and I think he wants the kids to see that mentality here,” Kuntz said. “You can’t go from novelty to all-in over night, but you have to start somewhere.”

In addition to working out alongside and watching the Struthers teams during their drills, the boys will also tour the football facilities at Youngstown State University, see a Pittsburgh Pirates game and attend an exhibition game between the Cleveland Browns and Washington Redskins.

Pam Iarussi, Keary’s mother and a teacher at Lowellville schools, helped organize the trip. She reached out for donations to help make the boys’ trip to the United States special, and was not left wanting for responses.

“Covelli Enterprises and Chick-fil-A responded and offered to provide dinner to the boys,” she said. “The boys’ families paid for their plane tickets and visas, but everything else on our end of the trip has come in through private donations.”

She said the outpouring of support for the boys was indicative of the Mahoning Valley’s shared love of football and, more broadly, of its generosity.

“My dad had this saying: ‘We don’t have much, but what we have, you’re welcome to it.’ People here are willing to share what they’ve got with anyone, even a bunch of kids from 5,000 miles away.”